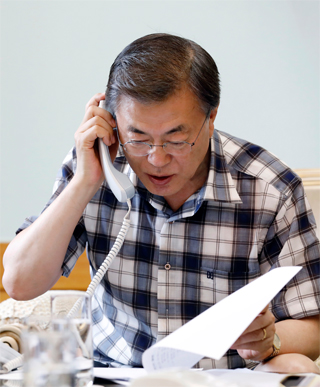 President Moon Jae-in talks with U.S. President Donald Trump on the phone shortly after returning to the Blue House from a short vacation. [YONHAP]

Supporters of President Moon Jae-in and then-opposition party members used to claim that peace would come under the liberals’ rule — and war under the conservatives’. But North Korea has been more provocative under Moon, firing off missiles seven times since the liberal president took office in May. It shot two missiles in the first 100 days of former conservative president Lee Myung-bak and three for Park Geun-hye.

It’s not just a matter of the number of tests. Pyongyang has advanced its missile technology enough to put the U.S. mainland in its range.

North Korea’s nuclear ambitions, which first surfaced in 1993, have now become a direct security threat to the United States. Washington had regarded it as a threat to the multinational nuclear non-proliferation treaty. That’s why Uncle Sam tried to solve the problem through the UN Security Council. But now the threat has come close to home, forcing Washington to talk it out directly with Pyongyang or use military force to remove the danger. For the first time in decades, North Korea can finally sit across the table from the U.S. as a nuclear state and confidently demand a guarantee for its regime.

Pyongyang would not wish to include Seoul in any deal. It would be outraged over South Korea’s attempt to take the front seat in North Korean affairs. It can hardly be happy about South Korea getting between Pyongyang and Washington in arms talks among nuclear states when it does not even have wartime operational control, not to mention nuclear weapons.

Washington might also be uncomfortable about Seoul squeezing in because it may have to confront the two Koreas at the same time with Seoul’s leadership under a left-leaning president who values “one race” more than a relationship with a foreign ally. As if to suggest Washington’s mindset, Marc Knapper, acting U.S. ambassador to Seoul, said in a visit to the National Assembly last week that South Korea would be playing “one of the roles” — not a major role — in coming up with a solution.

Washington is currently mounting diplomatic pressure on Pyongyang. It has been talking tough by threatening it with a surgical strike to force the recalcitrant regime to come to the negotiating table. Unfortunately, small states have no place in such a high-stakes poker game. South Korea has only one choice. It must stop whining about wanting the driver’s seat and be practical by siding with Washington in its diplomatic pressure.

This does not mean Seoul should settle for a supporting role. We can have a place in future talks with Pyongyang when North Korea finally comes out for negotiations. In the meantime, we should help Washington. All South Korean presidents have wrecked their relationships with North Korea because they were over-eager about achieving something during their five-year single term. But we don’t have that luxury now that North Korea poses an immediate threat to the U.S.

The conditions have changed. If we do not frankly admit our fundamental weakness, we could find ourselves in bigger trouble than merely feeling left out. But the aides around the liberal president in the Blue House appear to be overly relaxed. They seem to subscribe to the wishful thinking that Pyongyang will somehow come around. If that’s the case, Moon could be following in the pitiful footsteps of his former boss Roh Moo-hyun, who neither stopped Pyongyang’s nuclear threat nor maintained good ties with Washington.

To make a long story short, Moon must immediately order the installation of the Terminal High Altitude Area Defense (Thaad) system. We must come up with tough measures corresponding to U.S. sanctions on Chinese institutions that trade with North Korea. Our security front is too fragile and risky to obsess over the feelings of Pyongyang and Beijing.