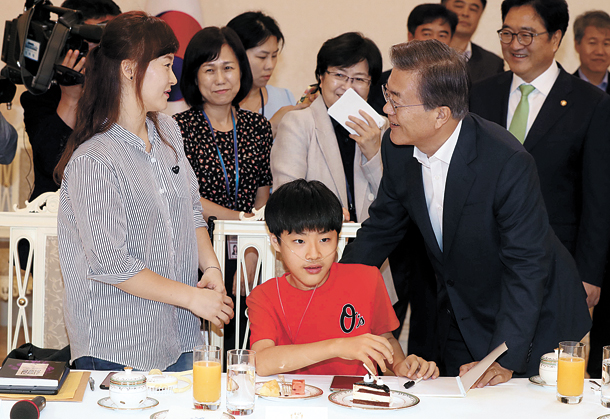 President Moon Jae-in apologized on Tuesday to victims suffering from pulmonary disease caused by toxic humidifier sterilizers that affected over 5,000 people and caused the deaths of more than 1,200 people during an emotional meeting at the Blue House.

Moon met with 15 victims and relatives of victims of toxic humidifier sterilizers that were sold between 1994 and 2011.

“As a president, I convey my apology to you on behalf of the government,” said Moon, as many of the attendees were in tears. The Tuesday meeting was the victims’ first meeting with the president since the scandal was first reported six years ago. “The biggest mission for the government is to protect the lives and safety of the people. But in retrospect, the government failed to prevent damages from toxic humidifier disinfectants for all these years.”

Moon added that even after damage reports were made public, authorities failed to address the issue in a timely and active manner, leaving many victims exasperated.

“I just bought a humidifier from a local store and that led to the death of my child,” a victim’s parent said during the meeting. “Stores were selling humidifier [sterilizers] for 20 years [without any government check-up]. Is the government free from any responsibility?”

Among the 15 people at the meeting was a 14-year-old boy named Im Sung-jun, whose respiratory system was damaged when he was 14 months old due to the use of a sterilizer. He now requires an oxygen tank at all times. The 15 attendants asked Moon for a special team to reinvestigate sterilizer-related cases and widen the scope of compensation plans for victims. Moon promised that his government will reflect on their demands. Moon’s apology reflected frustration with previous governments for their failure to detect and ban the harmful substances.

Moon’s meeting with the victims came 13 days after an appellate court sentenced a former head of the British-controlled Reckitt Benckiser Korea, Shin Hyun-woo, to six years in prison for professional negligence. The Britain-based company sold Oxy humidifier sterilizers without safety checks, which could have found harmful chemical substances in the products and prevented their commercial sale.

People started contracting pulmonary illnesses and developing other health issues after using the sterilizers to purify the water in their humidifiers. The humidifiers worked fine with regular water, but consumers believed that by adding sterilizers they could prevent mold buildup. More than a dozen companies started producing humidifier sterilizers after they saw how well Oxy Reckitt Benckiser fared in 2005 with its own line. They failed to test the toxicity of certain humidifier sterilizer compounds, like polyhexamethylene guanidine (PHMG), which can be fatal when inhaled.

Because of its large market share, the Oxy brand sterilizers caused the most damage, with 181 people falling ill and 73 deaths. As of July, a total of 5,657 cases were reported, 1,212 of which involved deaths.