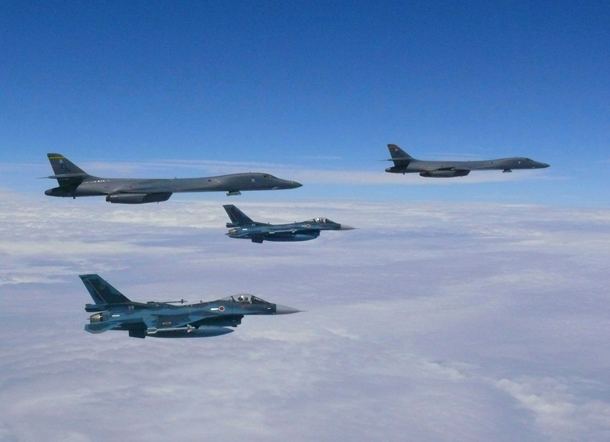 Two U.S. Air Force B-1B Lancer strategic bombers are deployed on a 10-hour mission over the Pacific Ocean on Aug. 8, flying over Japan, the East China Sea, and the Korean Peninsula. The two B-1B bombers departed from the Andersen Air Force Base in Guam and are pictured accompanied by Japanese Air Force fighter jets. [AP/YONHAP]

U.S. President Donald Trump said Tuesday North Korea will face “fire and fury like the world has never seen” if it continues to threaten the United States, apparently in response to remarks made by North Korean Foreign Minister Ri Yong-ho, who said his country will “teach the U.S. a severe lesson with its nuclear strategic force.”

“North Korea best not make any more threats to the United States,” Trump told reporters at his New Jersey golf club during a vacation. “He has been very threatening beyond a normal statement. As I said, they will be met with fire, fury and frankly power, the likes of which this world has never seen before.”

Trump’s statement came after Ri told a regional security forum in Manila Monday that Pyongyang was prepared to use its nuclear force against Washington in retribution for sanctions passed by the UN Security Council, which was led by the United States.

At a meeting at the 50th Association of Southeast Asian Nations (Asean) Regional Forum (ARF), Ri stressed that North Korea’s nuclear and ballistic missiles were under no circumstances on the negotiating table, adding that the country will not “flinch even an inch” from further developing its nuclear arsenal unless the United States ditches its hostile policy toward the regime.

On Wednesday, North Korea took its menace a step further, threatening to fire a Hwasong-12 intermediate-range ballistic missile near Guam and the U.S. military bases there. The operation will enable “Yankees to be the first to experience the might of the strategic weapons of the DPRK closet,” it said, using the acronym for its official name, the Democratic People’s Republic of Korea.

The statement was made by the Korean People’s Army (KPA) Strategic Force and reported via the official Korean Central News Agency (KCNA).

“The KPA Strategic Force is now carefully examining the operational plan for making an enveloping fire at the areas around Guam with medium-to-long-range strategic ballistic rocket Hwasong-12,” the KCNA statement read, “in order to contain the U.S. major military bases on Guam including the Anderson Air Force Base in which the U.S. strategic bombers...are stationed.”

The North didn’t give a specific timeline but said the operational plan was about to be thoroughly examined, after which it will be reported to the Supreme Command. It will be carried out in a “multi-concurrent and consecutive way” upon Kim Jong-un’s order.

The North blamed Washington for ratcheting up tensions in the region with its flight of strategic bombers, referring to the U.S. Air Force’s sending of two supersonic bombers from Guam to South Korea on a 10-hour mission last week in response to Pyongyang’s second ICBM test on July 28.

The situation, said the North, required its army to keep an eye on Guam and take “practical actions of significance to neutralize it.”

“The U.S. should clearly face up to the fact that the ballistic rockets are now on constant standby,” said the KCNA.

North Korea is actually capable of hitting Guam with its Hwasong-12. When the missile was tested on May 14 from the northwest city of Kusong, in North Pyongan Province, it traveled about 800 kilometers (497 miles) for 30 minutes after peaking at an altitude of 2,000 kilometers, falling 400 kilometers outside of waters in Japan’s exclusive economic zone.

Days later, South Korea’s military analyzed the missile could have targeted U.S. military bases in Guam, about 3,400 kilometers away from the North, had it been flown at a normal angle.

On North Korea’s latest warning to hit Guam, South Korean government officials pointed out it was the first time Pyongyang has ever threatened to hit the American island while specifically mentioning the type of missile that would be used, but said the North was probably doing so to save face after the UN sanctions were passed.

The wording of the statement shows North Korea is “scared,” a senior Blue House official said on background.

The Guam scenario comes at an alarming time for the U.S., as the Washington Post cited U.S. intelligence officials Tuesday as saying that North Korea has successfully produced a miniaturized nuclear warhead that can fit inside its missiles, a conclusion not yet mentioned by South Korea’s military.

The analysis was said to have been completed on July 28 in a classified summary by the U.S. Defense Intelligence Agency (DIA). In another assessment, the officials reportedly said that the United States calculated last month that Pyongyang possessed up to 60 nuclear weapons.