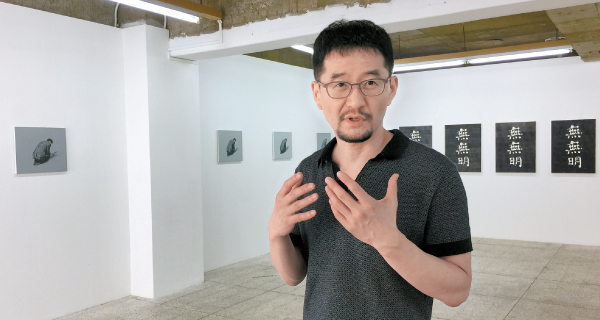 Artist Young Min Moon discusses his works at the alternative space Sansumunhwa in Gwanak District in southwestern Seoul last week. Behind him are seen his “Some Sense of Order” series, left, and his “Untitled (Mu-mu-myeong)” series on the right. [MOON SO-YOUNG]

To viewers unfamiliar with Korean culture, the image of a formally-dressed man kneeling and lowering his head, which appears in Korean-born, Massachusetts-based artist Young Min Moon’s paintings repeatedly, might look strange and bring about an array of interpretations.

To Koreans, on the other hand, it is a familiar image that can be seen in jesa, or memorial rites, in which the country’s Confucian tradition and Western culture of mourning clothes are mixed.

Still, the images of a man kneeling and bowing in Moon’s small oil paintings, now on view at alternative space Sansumunhwa in southwestern Seoul, are enigmatic even to Koreans, due to their empty backgrounds, calm grey tones, and, most of all, repetition.

“The act of repetition comes from my recognition of limitations in both bowing and painting,” Moon, 49, told the Korea JoongAng Daily, at the alternative space last week. 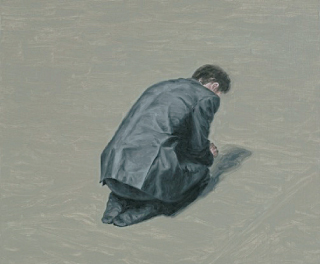 “The act of bowing in jesa, an attempt of linking the realm of the living to that of the dead, or the spiritual world, is repeated due to its inherent probability of failure and inherent insufficiency,” he said. “I like physical nuances of bowing, which reflect the spiritual attempt to engage in remembrance of those who passed away. I try to paint it but recognize the limitations. So my act of painting is repeated just like bowing.”

“I regard my paintings as a slow and quiet resistance to inattention, to spectacles and to the fast pace [of contemporary life],” the artist continued. “I would finish a series of paintings of one bowing pose and go to another pose when I came to think I had done enough.”

Moon, born to a Catholic family, immigrated to Canada in the 1980s with his family, and now works as professor of art at the University of Massachusetts Amherst. In childhood, he would observe the jesa of his family, which both had Confucian and Catholic elements.

“I was fascinated by the rites, in particular, by the solemn and silent atmosphere during the act of bowing,” he said.

Moon’s 2015 note reads “I am seeking some sense of order particular to my own hybrid kind of upbringing in both the Confucian and Catholic orders in South Korea.”

The exhibition runs until Aug. 19. For details, visit sansumunhwa.com.