UberEATS is now taking orders - but only in Itaewon and Gangnam

UberEATS is now taking orders - but only in Itaewon and Gangnam 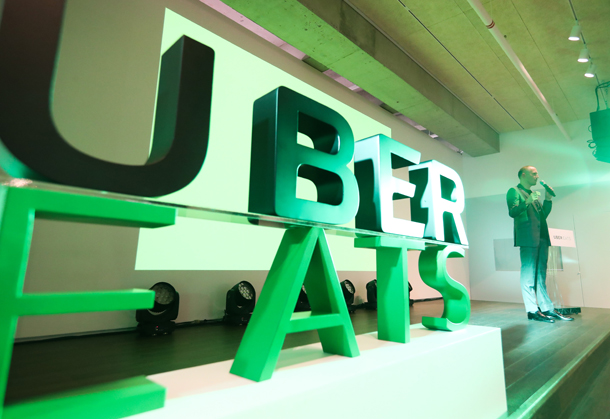 Allen Penn, head of UberEATS for the Asia Pacific region, talks to the Korean press at the UberEATS’ launch event at D Museum in central Seoul on Thursday. [YONHAP]

Uber on Thursday launched its app UberEATS in Seoul, pitting it against the city’s already highly competitive food delivery market.

The on-demand service from the scandal-ridden ride-hailing service provider will initially only be available in Itaewon in central Seoul and Gangnam in southern Seoul and will gradually expand to other regions in the capital. Seoul is the 112th city where the service is operational.

Allen Penn, head of UberEATS for the Asia Pacific region, said in a press conference on Thursday that over 200 restaurants in Seoul have signed up to partner with the app to have their food delivered to customers’ doorsteps by motorcycle and bicycle. Over 60 percent of the restaurants are introducing a food delivery service for the first time.

Some of the restaurants he named include Jang Jin Woo Sik Dang, a Western fusion restaurant chain that originated from Gyeongridan-gil, Itaewon, P.F. Chang’s, an American-born Chinese restaurant chain, and Maman Gateau, a dessert cafe. Orders open at 11 a.m. and end at 11 p.m., with last orders at 10 p.m. The maximum delivery time will be 35 minutes, according to Penn.

UberEATS faces fierce competition against established rivals in Korea, known as “delivery heaven.” Small restaurants have been offering delivery services for decades to anywhere - even to the parks along the Han River - without an additional charge and even McDonald’s provides free around-the-clock delivery for orders over 8,000 won.

The restaurant scene in Seoul is dynamic. The city of 10 million people has 130,000 restaurants, and you bump into a fried chicken place every 122 meters (400 feet) on average. Half of all restaurants in Seoul shut down less than a year after opening, according to Statistics Korea.

Eyeing the upbeat growth potential of the food delivery industry that could capitalize on commission fees, start-ups have been scrambling to enter the market since 2012. Korean company Baedal Minjok accounts for 51 percent of the food delivery market, followed by Yogiyo’s 35 percent and Baedaltong’s 14 percent as of January, according to market researcher Nielson Koreaclick. The latter two are owned by German food delivery behemoth Delivery Hero.

Recently, delivery of high-end, costly cuisine has become more fashionable, allowing restaurants to open up their business to a wider customer base. Baedal Minjok in 2015 launched sister app Baemin Riders, which specializes in dishes that are usually challenging to deliver, and Shuttle caters specifically to restaurants and customers - mostly expatriates - in the Itaewon area.

“We are not necessarily threatened by UberEAT’s entry as the No. 1 player in the market,” said a sales manager at Baedal Minjok. “But we are definitely monitoring its movements, given it’s hard not to ignore a global giant with the capability to draw on a sizable budget.”

“Food delivery services is very advanced in Korea and Koreans use food delivery a lot,” said Penn when asked how UberEATS could differentiate from existing rivals. “I feel like we are still at the beginning of food delivery service… but we believe we could bring new customers and new restaurant with a number of the technological features such as consistent reliability, speed of delivery and real-time order tracking.”

He also said the app studies users’ preferences over time to propose food that its users might prefer - just like Netflix comes up with recommendations customized for individual users.

“The UberEATS app that the person next to you is looking at can be different from yours,” he added.

You need to download a separate UberEATS app to use the service. Existing Uber users don’t need a separate account because their information, including credit card number, is automatically relayed to the new app.

Users are currently charged no delivery fee as a promotion to mark the launch of the service but a uniform drop-off fee of 3,500 won ($3) will be applied to each separate order afterwards. In other parts of the world, the app runs different charging systems.

Anyone aged 18 or older with their own motorbike or bicycle is qualified to become a delivery partner. Unlike in other parts of the world, UberEATS does not offer delivery by car - probably to avoid the hassle of clashing with the complicated motor freight transportation business act.