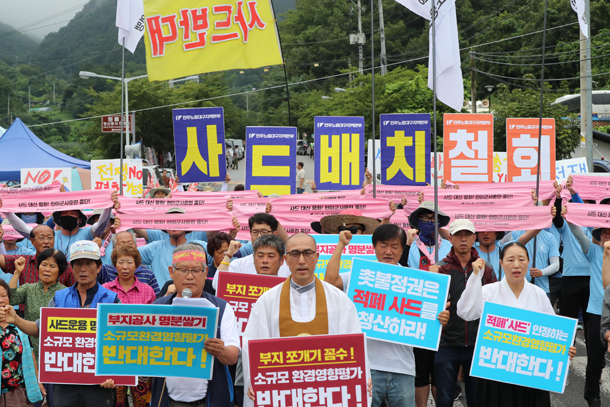 Locals, civic groups and religious activists take part in a rally in front of town hall in Soseong-ri, Seongju County, North Gyeongsang, on Thursday, protesting a small-scale survey that would measure the levels of noise and electromagnetic waves and demanding a full-scale environmental impact study instead. [YONHAP]

SEONGJU, NORTH GYEONGSANG - The government delayed a survey on Thursday that would measure the levels of noise and electromagnetic waves from the Terminal High Altitude Area Defense (Thaad), a controversial U.S. antiballistic missile system, due to the protests by local residents and activists.

“The small-scale environmental impact study on the U.S. Forces Korea’s deployment of Thaad, planned for today, is postponed because we need additional cooperation of nearby residents and civic groups,” the Ministry of National Defense said Thursday. “We will reschedule the survey. It is regretful that we have to rearrange the session due to unfortunate circumstances despite the ministry’s explanations and requests.”

The Ministry of National Defense and the Ministry of Environment planned to conduct the survey at 10:30 a.m. on Thursday inside a military base in the rural village of Seongju. Officials from the central and local governments, experts and media were to participate in the survey.

In June, President Moon Jae-in ordered a proper environmental study for the Thaad deployment. Key components of a Thaad battery, including a radar system and two missile launchers, were installed on a former golf course in Seongju on April 26, less than two weeks before the May 9 election that brought Moon to power. A Thaad battery typically consists of six launchers, 48 interceptors, a fire control and communication unit and radar.

After the North’s two successful tests of intercontinental ballistic missiles in July, Moon said the remaining four Thaad launchers would be deployed to counter the growing threat.

The Ministry of National Defense said last month it will conduct a small-scale environmental study for the already deployed components and barracks of the soldiers who operate the system. At the same time, the ministry said it will also conduct a general environmental assessment for the entire site, formerly used as a golf course.

Residents living near the site, however, demanded a strategic environmental impact study, which requires the withdrawal of the U.S. antimissile system and takes about a year to complete, as opposed to a small-scale study, which does not requires its withdrawal and only takes about three to four months.

After the plan to conduct a small-scale study was announced, residents, university students and civic activists vowed to stop it. About 100 residents and activists held a press conference around 9 a.m. and blocked the road to the military base.

“The Ministry of National Defense is pushing for a small-scale environmental impact study instead of a strategic one, because it wants to avoid the possibility that the Seongju golf course is ruled unfit for the Thaad deployment,” the protesters said in a statement. “The ministry also neglected to listen to local residents’ opinions. They are trying to complete the deployment without due process.”

“The Moon administration should have stopped the ministry from planning and conducting a small-scale environmental study from the beginning,” they said. “It must stop all moves that will justify the small-scale survey and stop the operation of Thaad and related construction work. We demand that the Moon administration remove the Thaad system from Seongju first and conduct a strategic environmental study.”

About 300 university students from the 21C Korea College Students’ Union, or Handaeryeon, also gathered in Seongju for the protest since Wednesday, warning that they will physically block the survey. The leftist group, launched in 2005, is the largest student organization in Korea. The students, however, did not join Thursday morning’s press conference.

After the road was blocked, officials of the defense and environment ministries and journalists created a plan to enter the base using helicopters. The aircraft, however, were unable to fly due to rain and fog, and the ministry issued a press release around 10:30 a.m. and announced the postponement.

Promising to make a new plan to reschedule the survey and continue to persuade the residents, the ministry also said it will conduct an investigation into the U.S. troops’ behavior during the partial installation of the Thaad system in April. Two launchers and a powerful X-band radar were deployed without public announcement, and some U.S. soldiers took photos of protesting residents from the convoy, fueling public anger.

A general of the U.S. Forces Korea will issue an apology over the incident, the ministry said.