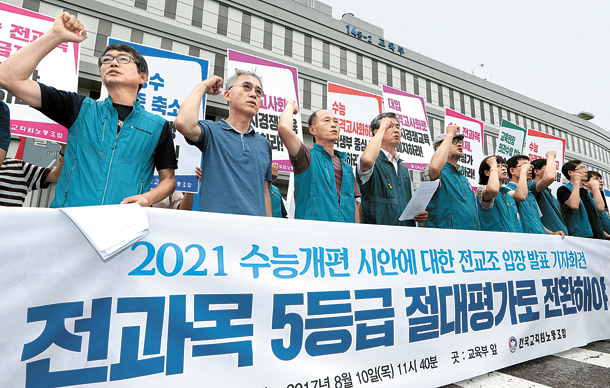 Members of the Korean Teachers and Education Workers’ Union protest in front of the Ministry of Education headquarters in the Sejong Government Complex on Thursday, demanding the government scrap the bell curve grading system of the national college entrance exam. [YONHAP]

The Ministry of Education released Thursday a proposal to revise the national college entrance exam, which may end the grading on a curve by 2021.

For the college entrance exam, or the College Scholastic Ability Test, students are graded on a scale of one to nine, one being the highest grade.

The Education Ministry proposed two possible options: continuing to grade Korean language and literature, mathematics and an elective subject on a curve, while grading other subjects absolutely; or grading all subjects absolutely.

“The purpose of implementing an absolute grading system in the college entrance exam is to help the students feel less pressure in preparing for the exam,” said Park Chun-ran, vice minister of education, in a press briefing Thursday at Sejong Government Complex.

The ministry’s revision will be applied from 2021.

“A complete overhaul of the curve grading system will help students find more time to relax and be creative,” said a member of the civic group No Worry for Private Education.

“There seems to be rising opposition among the public against a complete transformation of the evaluation system,” said a member of the Democratic Party. “Within the ruling party, there is more support for the option of testing only a number of subjects absolutely.”

“Would parents and the students be able to live with the fact that in an absolute grading system, a student with a score of 91 out of 100 and another with a score 100 will receive the same grade?” Prime Minister Lee Nak-yon asked in an inter-ministry meeting on Aug. 3. “If the absolute evaluation system is implemented on all subjects all at once, it may face some opposition.”

Education Minister and Deputy Prime Minister Kim Sang-gon told media outlets “we will need to review whether to implement the revision all at once or in stages.”

The ministry will announce its decision on Aug. 31, said Lee Ju-hee, head of the department of the college entrance exam policy at the ministry.

“The ministry will take in public opinion through hearings until then,” she said.

Hearings will be held today in Seoul, on Wednesday in Gwangju, on Aug. 18 in Busan and on Aug. 21 in Daejeon.

The draft proposal of revisions to the college entrance exam also includes testing all students, regardless of their majors, on a new subject called “basic social science and pure science.” Students are currently given the option to choose two elective subjects, either in the realm of social sciences or in pure sciences, based on their major.

“The proposal is to help Korea educate its young to be multifaceted and knowledgeable, and to narrow the divide between the pure science majors and social science majors,” Vice Education Minister Park said.

The plan also proposed options on whether to continue to use national education broadcaster EBS’ textbooks to draft college entrance exams.

Some 70 percent of the questions on the college entrance exam are based on those in the EBS textbooks.