The effects of sanctions

The effects of sanctions 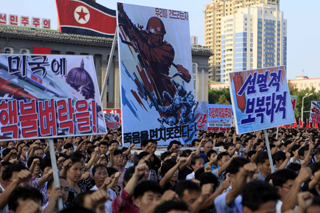 Tens of thousands of North Koreans gather for a rally at Kim Il Sung Square to show their support for Pyongyang’s rejection of the United Nations’ latest round of sanctions on Wednesday. [AP/YONHAP]

At the first meeting between Moon Jae-in and Donald Trump in Washington, D.C. on June 30, one would have been hard pressed to find the policy gaps between the two leaders that had been trumpeted by pundits in the lead-up to the summit. President Moon, in particular, lined up with an American approach to North Korea’s nuclear and ballistic missile tests that focused on maximum pressure and sanctions.

While President Moon still leaves room for diplomacy (as does President Trump), the focus after North Korea’s July 4 intercontinental ballistic missile test is on sanctions of all types. Because we are likely to be hearing this word coming out of the mouths of policymakers for the foreseeable future, it is worthwhile to take a moment to think about the term. Here are five observations about sanctions.

First, sanctions are a tool of diplomacy. Many critiques of sanctions argue that they are maliciously designed to choke the regime to death, without discrimination between the ordinary people and the elite. This is incorrect. Sanctions have always been part of the diplomatic toolbox. Their purpose is not nefarious but designed to apply concentrated economic pressure on the regime in order to compel it to return to the negotiating table. In almost any historical case of a negotiated settlement, for example anti-apartheid in South Africa or the Iran nuclear deal, sanctions constituted an integral part of the solution.

Second, sanctions don’t work until they do. What this means is that sanctions are the most maligned policy instrument in the diplomatic toolkit. The common refrain with regard to sanctions against North Korea is that they do not work, given that the regime has been sanctioned for over 50 years by the United States. But history shows that every sanctions campaign is criticized as ineffective up until the day it actually compels a change in the target state’s behavior. In the case of Iran for example, many criticized the sanctions effort as useless — up until the day the pressure forced the leadership to return to the negotiating table. At this point, few people give credit to sanctions and find some alternative explanation for the restart of negotiations. Indeed, there may be a new element of diplomacy that lures the target state back to the table, but the permissive condition is the target’s concern that the sanctions will continue to escalate. Thus patience is a virtue when it comes to sanctions.

Third, North Korea is not the most heavily sanctioned country in the world. Again, there is a common view that North Korea has been under sanctions since the Korean War and that additional sanctions are the equivalent of flogging a dead horse. But this is a mischaracterization. The level of international sanctioning against North Korea is high, but it is not the most heavily sanctioned country in the world. Indeed, the level of sanctions against Iran prior to the nuclear agreement with the Obama administration was far more extensive than that against Pyongyang. Before we give up on sanctions, the policy imperative is to replicate the scope and depth of the Iran sanctions on North Korea (Chinese cooperation notwithstanding) to see if it can have a similar effect.

Fourth, there is a “Catch-22” when it comes to sanctions’ effectiveness and diplomacy. The purpose of sanctions is to compel a negotiation. Often in difficult cases like North Korea, it will require extensive sanctions. However, if sanctions are truly effective, the first condition of the target state to return to negotiations is the lifting of those very sanctions. Thus sanctions may be only as effective as they are successful. For most appliers of sanctions, this becomes a difficult choice often hotly debated within government: to invest in the negotiation or continue the pressure. Ideally, the choice is to do both, allowing the sanctions to enhance one’s bargaining position, but in practice, the target state makes the condition for returning to negotiations the lifting of the sanctions.

Fifth, the more effective the sanctions become, the harder they are to remove. Although the level of sanctioning against North Korea is not as thorough as that against Iran, the sanctions regime has grown much more robust under six UN Security Council resolutions. In addition to these resolutions, individual countries like the United States, Japan and others have implemented bilateral sanctions against Pyongyang for their nuclear and missile tests.

In aggregate, these sanctions have produced an interconnected and overlapping web that in practice becomes very hard to unwind. Removing one set of sanctions does not necessarily open up commerce with North Korea because other sanctions related to nuclear tests still remain in effect.

*The author is D.S. Song-KF professor of government and director of Asian Studies at Georgetown University.