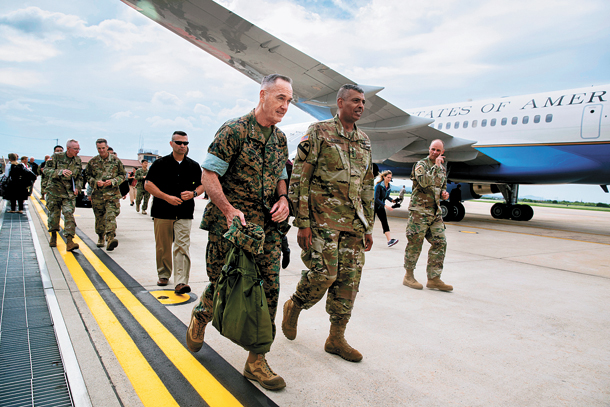 President Moon Jae-in will meet with Gen. Joseph Dunford, the chairman of the U.S. Joint Chiefs of Staff, at the Blue House on Monday amid heightened tensions on the peninsula aggravated by the war of words between Pyongyang and Washington over the past week.

Moon’s meeting with the U.S. four-star general is expected to focus on reaffirming the bilateral alliance in the face of North Korea’s bellicose rhetoric, especially with its warning issued last Thursday that it could surround U.S. territory Guam, home to U.S. Navy and Air Force bases, by firing four missiles into the waters 30 to 40 kilometers (18.6 to 24.8 miles) off the island’s coast, in a direct warning to the Trump administration.

Gen. Dunford arrived in Seoul on Sunday for a two-day trip during which he is also scheduled to meet with South Korea’s Minister of National Defense Song Young-moo and his South Korean counterpart Gen. Lee Sun-jin.

The general’s visit comes as North Korea and the United States exchanged tirades against each other, which at one point led U.S. President Donald Trump to declare that his military was “locked and loaded” for military action should Pyongyang “act unwisely,” heightening anxiety in the region over the prospect of conflict that could bring about dire consequences given highly concentrated firepower along the demilitarized zone on the peninsula dividing the two Koreas.

Amid looming concerns, Trump and Chinese President Xi Jinping talked over the phone on Saturday with the latter calling for “restraint” on all sides involved in the matter to avoid “remarks and actions that could escalate tensions” on the peninsula, according to the Global Times, a tabloid controlled by China’s Communist Party. “China is ready to work with the United States to appropriately resolve the issue,” said Xi, according to the news outlet.

Xi’s message to Trump underscores Beijing’s wish that the current growing tensions in the region do not spill into military action that could lead to the outbreak of a full-fledged war.

The White House said in a statement released Saturday in Washington time that they “agreed North Korea must stop its provocative and escalatory behavior.”

It added that the relationship between the two leaders is “an extremely close one, and will hopefully lead to a peaceful resolution of the North Korea problem.”

In an apparent warning to Pyongyang against military action that can be taken as a direct threat to the United States, an editorial in the Global Times called on the Chinese leadership to “make clear” that if it is Pyongyang who fires off missiles that “threaten U.S. soil first and the U.S. retaliates, China will stay neutral.”

The paper, however, cautioned that if the retaliation leads to an attempt to overthrow the North Korean regime and “change the political pattern of the Korean Peninsula,” Beijing will intervene, without elaborating how.

Since the Global Times has served as an unofficial channel conveying China’s policy, its editorial can be seen a message to Pyongyang that China will not object to U.S. surgical strikes against the North’s missile sites in response to Pyongyang’s launch of missiles targeting U.S. territory.

President Moon is entering what local media here call a “super week,” in which the leader will try to mitigate the situation. Moon told Trump in a phone conversation last week that a war on the peninsula “should never happen again” and that the issue should be settled “in a peaceful and diplomatic manner.”

Moon is expected to reiterate his point during a speech on Tuesday commemorating the 72nd anniversary of the end of the Japanese colonial rule from 1910-1945, known as Liberation Day.

Of the many presidential speeches that take place, the Aug. 15 Liberation Day speech is seen as one of the most important speeches given by the commander in chief, laying out the policy goals of an administration as well as highlighting its achievements to shore up public support.

Cheong Seong-chang, a senior researcher at the Seoul-based Sejong Institute, told the Korea JoongAng Daily on Sunday that Moon will likely use the occasion to strongly urge Pyongyang to avoid further military action that would escalate tensions in the region.

“If the North had not made that threat of a missile launch against Guam, then Moon would have stressed on the need for improved inter-Korea relations and reconciliation,” said the North Korea expert.

“But as tensions have spiked with the North’s threat against the United States, it has become really difficult for Moon to make such overtures.”

On the possibility of the North’s further provocation, Cheong remarked Kim Jong-un would likely conduct its sixth underground nuclear test or another intercontinental ballistic missile (ICBM) test around Sept. 9, the day on which North Korea celebrates the anniversary of its founding in 1948.