Portrait may offer the first look at Queen Min

Portrait may offer the first look at Queen Min 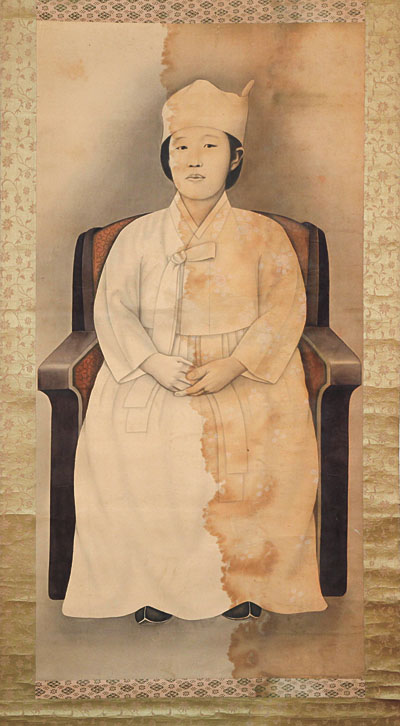 An alleged portrait of Queen Min (1851-95), also known as Empress Myeongseong, was shown to the public Monday by the Daboseong Ancient Art Museum in central Seoul, although its authenticity is not certain.

Since there is no photograph or portrait confirmed to be of Queen Min, the wife of the first emperor of the Korean Empire (1897-1910), King Gojong, no one knows what she looks like.

To mark the 72nd year of Korea’s liberation from Japan, which is today, the Daboseong Ancient Art Museum organized a special exhibition of 300 previously unseen items, including the Queen Min portrait. The portrait is 48.5 centimeters (19 inches) wide and 66.5 centimeters long, featuring a woman wearing white hanbok (traditional Korean dress) and a white scarf on her head, sitting up straight in a Western-style armchair.

The museum believes the portrait is Queen Min’s. On the back is an inscription that reads in Chinese “Min-ssi madame portrait,” “ssi” being a commonly used honorific in Korea attached at the end of a name.

When the museum acquired the portrait from a collector who wanted to stay anonymous several years ago, only the words “madame portrait” were visible. Infrared imaging revealed the name Min-ssi, which had been purposely removed from the back of the portrait.

However, the museum refused to give more specific details such as the presumed year of the painting, how the infrared imaging was conducted, or even the names of the experts they worked with. The museum also failed to give evidence that the portrait was stored in Unhyeon Palace, also known as the Unhyeongung Royal Residence, before it came into the hands of the collector.

“We are very positive that the woman in the portrait is Queen Min,” said Kim, “however, I agree that further research is required and will announce further details in the future.”

Experts pointed out that the museum claims can’t be taken at face value and that further research is necessary. The exhibition runs until Aug. 31.