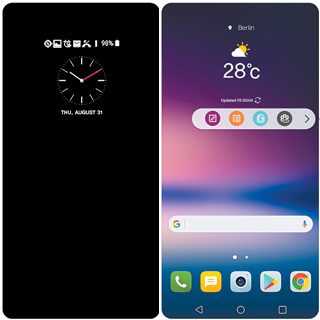 The company said the LG V30, slated to be showcased in Berlin on Aug. 31, will come with a “Floating Bar” that displays the most used applications on the screen if users click on a small icon on the side.

Through its Always-On function, the smartphone will continuously display key information on the screen by using a minimal amount of power, helping users activate Bluetooth, Wi-Fi, the camera and light, it added.

LG Electronics said the V30 will come with an improved camera with a F1.6 lens, which will be 25 percent brighter than the F1.8 lens adopted by its predecessor, the LG V20.

A lower number in aperture indicates that a camera is capable of gathering more light, leading to more vivid photos and videos.

The tech giant added that it adopted Crystal Clear Lens for the rear camera to provide users with optimized color. The company said such glass-based material, usually applied to high-end DSLR cameras, will allow the V30 to capture more details of objects compared with other plastic-based lens.

As for security, the V30 is able to screen fingerprints and faces, LG said.

LG Electronics has been releasing various teasers of the V30 to grab potential users’ attention, as the flagship device is anticipated to play a decisive role in revitalizing its earnings.

The company’s handset business has been posting quarterly operating losses since the third quarter of 2015.