Moon warns against a new war

Moon warns against a new war 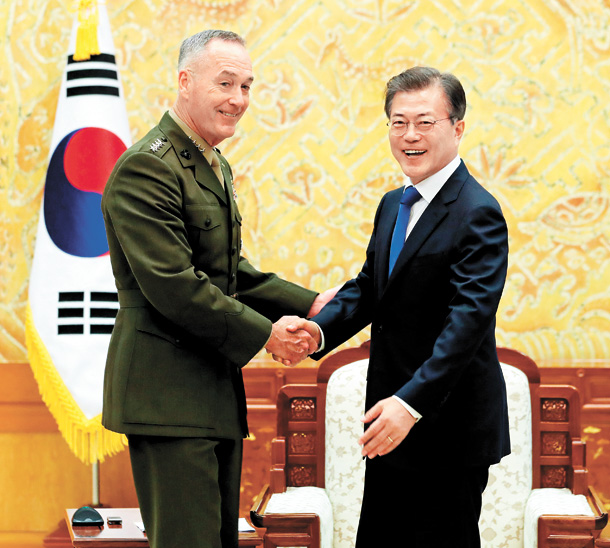 Amid rumors that a top U.S. military commander’s visit to South Korea was to discuss a possible military operation against North Korea, President Moon Jae-in stressed Monday there should never be another war on the Korean Peninsula.

Ahead of meeting Marine General Joseph Dunford, chairman of the U.S. Joint Chiefs of Staff, Moon hosted a senior secretariat meeting and addressed fears of a possible conflict.

In his opening remarks, Moon urged North Korea to stop escalating tensions and asked the United States to show a more cool-headed response.

Tensions on the Korean Peninsula escalated over the past week, particularly after Pyongyang’s threat on Wednesday to draw up plans for “an enveloping fire at the areas around Guam” by launching ballistic missiles. Moon assured the public that the “crisis is being managed with stability” and that the government is fully prepared for any contingency.

He stressed that the national interest is peace. “There should never be another war on the Korean Peninsula,” Moon said. “No matter what happens, North Korea’s nuclear issues must be resolved peacefully.

“North Korea must not worsen the situation any further,” Moon said. “I urge that the North immediately stop provocations and threatening words and behavior. If the North makes a right choice, we will drastically improve inter-Korean exchanges and cooperation and explore a bright future together.

“Regarding this point, the U.S. position is not different from ours,” Moon said. “The Korea-U.S. alliance is an alliance to defend peace. I am confident that the United States will cool-headedly and responsibly counter the current situation, just like our approach.”

Moon said armed forces do not guarantee peace on the Korean Peninsula. “Peace and negotiation may be painful and slow, but we must pursue them,” he said.

Those remarks were made hours before Moon met Dunford. The U.S. commander visited the Blue House and met with Moon from 4:30 p.m. until 5:20 p.m.

“Dunford told the president that the U.S. military supports economic and diplomatic pressure on the North for a nuclear-free Korean Peninsula,” presidential spokesman Park Soo-hyun said. “He said the United States is preparing military options in case they fail and Washington will closely consult with Seoul. He reiterated the position that the key is resolving the current crisis without going into a war.”

According to Park, Dunford assured Moon that the U.S. commitment to defend the South against the North remains firm. Moon also strongly condemned the North’s provocations and urged the United States to counter the situation with a strong combined defense posture.

Rumors have arisen that Dunford came to Seoul to discuss a possible military option, although the Ministry of National Defense said his visit was intended to check the combined forces’ readiness and reassure South Korea of the U.S. commitment to offer extended deterrence, including nuclear capabilities, against a North Korean attack.

Earlier in the day, Dunford met with top Korean officials including Defense Minister Song Young-moo and Chairman of the Joint Chiefs of Staff Lee Sun-jin. Korea was the second leg of an Asia tour, which includes Japan and China.

On his way to Seoul, Dunford said his trip was to support Washington’s diplomatic and economic campaign to resolve the situation, but reiterated that a military option is not completely off the table. “We’re all looking to get out of this situation without a war,” he said.

“As a military leader, I’ve got to make sure that the president does have viable military options in the event that the diplomatic and economic pressurization campaign fails,” he added.