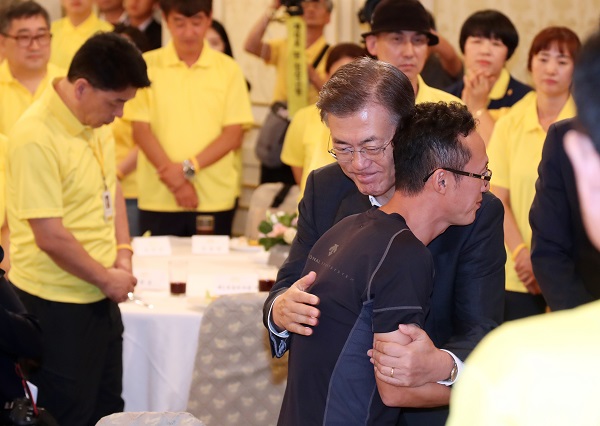 President Moon Jae-in embraces the father of a Sewol victim at a meeting at the Blue House on Wednesday, offering an official apology from the government for the tragic accident that killed 304 people. [YONHAP]

President Moon Jae-in on Wednesday apologized to the relatives of the people killed in the sinking of the Sewol ferry in an emotional meeting at the Blue House, saying government incompetence led to their deaths. He vowed to get to the bottom of the tragic accident that killed 304, mostly high school students on a field trip.

The president’s meeting with 207 Sewol survivors and relatives of the victims was filled with emotion, with many shedding tears remembering the fateful day of April 16, 2014, when the Sewol capsized and sank in waters off Jindo Island, South Jeolla, with almost no attempt to save the 304 victims. It was the country’s worst maritime disaster.

“Though it is late, I bow my head in apology and express my condolences on behalf of the government,” said the president with tear-filled eyes before survivors and relatives wearing yellow shirts. Yellow became a symbol for the hopes of finding survivors and then a symbol of mourning.

Moon said that as president he would ensure that every detail about the tragic sinking and the government’s bungled rescue operation would be thoroughly investigated.

“What can’t be denied is the fact that the government failed to prevent the tragedy. It was incompetent and irresponsible enough that it couldn’t save a single passenger from inside the sinking Sewol,” lamented Moon.

He mentioned a dispute between the bereaved relatives and the former Park Geun-hye government over a special investigation into the sinking and said the previous government avoided finding out the truth behind the sinking. It neglected its “basic responsibility in a display of cruelty” toward the families, Moon said.

Moon promised to do his best to have the National Assembly pass a special law to launch a second special investigation into the 2014 sinking as demanded by the families.

The families doubt the conclusions of the first investigation committee because they think the Park government was trying to obscure its failures to prevent the sinking and rescue passengers.

Moon said finding out the truth behind the tragedy was crucial to healing the broken hearts of the relatives and friends and making the nation a safer place so the victims’ sacrifices would not be in vain.

“I promise to you that the government will do its best in working with the National Assembly to find out the truth for the Sewol.”

Moon has been a strong advocate of the relatives. Four months after the sinking, Moon, as a lawmaker, went on a hunger strike in Gwanghwamun Square for 10 days demanding the Park government accept demands from the relatives for the creation of a special Sewol law.

Moon’s steadfast support for the relatives gained their trust, which was evident during Wednesday’s meeting.

“I am now overwhelmed with gratitude [for being invited to the Blue House],” said Kim Young-oh, the father of Yu-mi, a Danwon high school student who died in the Sewol.

“We tried so hard to get in here [to talk to President Park] in the past three years, going on hunger strikes, living on the street and rallying in front of a water fountain [near the Blue House].”

The relatives pleaded with the Park government for years to accept their demands for a fact finding process, which were largely rebuffed.

“Just having the president meet with us is a huge consolation,” said Kim, who went on a hunger strike for 46 days in 2014.

The Blue House said it sent security guards to Ansan, Gyeonggi, where most victims’ relatives reside, to transport them to the presidential office in a display of respect.

Those are the three places is where the families spent days and nights demanding their demands be met by the former Park government.

“And they entered the Blue House through the main gate, not a gate used by visitors,” Park added.