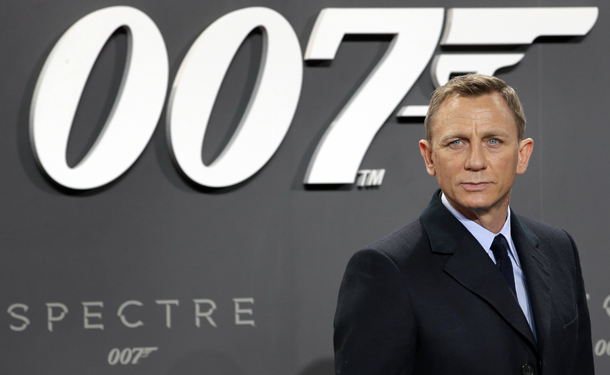 Daniel Craig poses for media as he arrives for the German premiere of the James Bond movie “Spectre” in Berlin, Germany in Oct. 2015. The British actor announced he is returning to play James Bond in the franchise’s next film, due out in 2019. [AP/YONHAP]

After months of gossip and denials, Craig on Tuesday night confirmed to Stephen Colbert on the “Late Show” that he will indeed return for another James Bond movie. The yet-titled film is due out November 2019.

“We’ve just been trying to figure things out,” Craig told Colbert. “I always wanted to. I needed a break.”

The 49-year-old actor’s stewardship of James Bond has spanned four films - and now will go for a fifth - but it has generated enough rumors to power the kind of doomsday device Bond is usually trying to stop.

Craig’s time as Bond has been distinguished. His “Skyfall” remains a high-point in both dollars and quality for the 55-year-old franchise. His last one, 2015’s “Spectre,” grossed $880 million worldwide. Most consider him a terrific Bond who has raised the bar for the franchise, and his official return was greeted warmly on Wednesday.

But the Craig-era, far more than its predecessors, has been characterized by a steady supply of Bond drama. Rumors and debates over who should be the next 007 have been nonstop for years, as has Craig’s frequent hints about calling it quits. In 2015, he famously said he’d rather “slash my wrists” than make another Bond movie, a comment he later explained as a kind of joke from the fatigue of just completing one.

Yet even while Craig keeps donning the tux, the next-Bond handicapping has been a year-round business. Tom Hardy, Tom Hiddleston, Jack Huston and Riz Ahmed are just some of the actors who have been linked to the role - some of them for the better part of the decade.

Others have lobbied for a female 007, like Charlize Theron. Idris Elba has been a favorite for at least two years, going to back to when Bond author Anthony Horowitz suggested he was “too street” for the part.

The meetings of producer Barbara Broccoli are spied on as if they concern national security. In a way, they do. Bond is a nation-state of its own, with more than $7 billion in box-office revenues alone. And that’s a heavy burden for any actor to bear.

Craig’s constant dance with Bond has very possibly been a smart strategy to deflect some of that pressure. He has, perhaps more than anyone since Sean Connery, eluded being completely defined by 007. Last year he did “Othello” off-Broadway with David Oyelowo. He gives a comic turn in Steven Soderbergh’s “Logan Lucky,” out Friday.

It’s as though Craig has always wanted his future with James Bond a little up in the air - shaken, if you like - so as to avoid the stasis that could set in for a decades-old franchise now preparing its 25th film. Craig acknowledged on Colbert that his return had been settled months ago, meaning he was evading questions about Bond as recently as that morning when he told a Boston radio station that “no decision has been made.”

And even as he confirmed he was returning, Craig suggested it will be his last one.

Though many surely will, don’t bet on it. Or to put it another way: Never say never again. AP