Naver’s AWAY goes in shared cars

Naver’s AWAY goes in shared cars 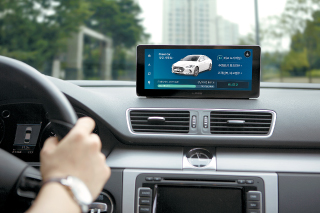 Naver Labs’ AWAY display is mounted above the central dashboard in a Green Car vehicle. [NAVER LABS]

The display hardware will be initially installed in 1,000 vehicles run by Green Car and the number will triple over the long term, said the Naver subsidiary Thursday.

AWAY combines entertainment features such as audio and music streaming and a navigation system, which are connected to mobile devices inside the vehicle - broadly dubbed “in-vehicle infotainment.”

Naver Labs designed and produced the display that is mounted above the central dashboard in Green Car vehicles, with an aspect ratio of 24:9. The display may vary in size, aspect ratio and design depending on customers’ demand, said Naver Labs.

An aspect ratio is a screen’s width compared to its length.

The launch of AWAY comes five months after Naver Labs unveiled its prototype at the 2017 Seoul International Motor Show in March.

The company inked a partnership with Green Car, part of Lotte’s car rental arm, in April for the in-vehicle infotainment platform.

Naver spun off Naver Labs in January to cope with ever-changing technological advancements. The subsidiary has been mostly devoted to R&D in autopilot technologies and robotics.

“We have been studying technologies that enhance the value of life as we try to understand the space and environment surrounding users and pay attention to the numerous possibilities that intelligent mobility is poised to create,” said Song Chang-hyun, CTO of Naver and chief executive of Naver Labs, in a statement. “AWAY is the fruit of our efforts to help build a life style that is safer and more valuable.”

As with global tech behemoths Google and Apple, Naver Labs foresees connected vehicles turning into “moving smartphones.” As cars become increasingly autonomous, drivers will be allowed more leisure time in the car, meaning in-vehicle infotainment systems like AWAY will play a much bigger role, according to a Naver spokesman.

The company is the first information technology company in Korea to land a license to operate autonomous vehicles for experiment and research purposes.

The era of connected vehicles isn’t too far distant. According to market researcher BI Intelligence, 75 percent of all vehicles produced in 2020 will be connected.

AWAY is based on Naver accounts. When a Naver user logs into his or her account, information such as playlists on the Naver Music streaming service and saved destinations on Naver Map is relayed to the display. AWAY could also be a personal assistant that works with voice recognition.

Naver Labs has customized a few features specifically for Green Car such as eco-driving, which analyzes a driver’s driving pattern, a system allowing the extension of a car’s return deadline and a mock calculation of the cost for the rental.

The Naver subsidiary explained it chose the car-sharing service as the first company with which to exploit big data gathered from its large user base.