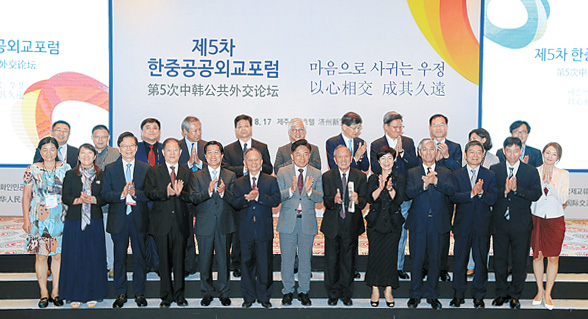 Key participants of the fifth South Korea-China public diplomacy forum during its opening ceremony on Jeju Island on Thursday. [YONHAP]

JEJU - South Korea and China held a joint forum on public diplomacy Thursday aimed at expanding exchanges between their people amid recently strained ties over Seoul’s move to install a U.S. missile defense system on its soil.

It has been held annually since their leaders met in 2013 and agreed to promote mutual understanding between their people.

This year’s forum, the fifth of its kind, came as South Korea and China are set to celebrate the 25th anniversary of establishing diplomatic ties on Aug. 24.

The relations, however, have been faced with a major challenge as the two neighbors remain at odds over South Korea’s decision in July last year to allow the deployment of a Terminal High Altitude Area Defense (Thaad) battery in its territory.

Seoul and Washington unveiled the plan, saying that it is intended to better defend against inbound missiles from North Korea. Beijing has been adamantly opposed to the move, claiming that it is part of the U.S. missile defense system that will hurt its strategic security interest.

The forum is seen as one of just a few joint events between the two countries at a time when the friction over the Thaad system seems to be intensifying.

“I think friends refer to relations in which each understands and respects different views, rather than agree on everything. In particular, they are supposed to help each other when the other side is in trouble,” Park told the forum in her opening speech.

“In particular, at a time when the security [of the other] is in jeopardy, they are those who have to help get over the challenge. It appears to be a time for South Korea and China as well to advance their relations to those of genuine friends that help each other get over difficulties,” she added.

Chinese Ambassador to South Korea Qiu Guohong said Seoul and Beijing have had many difficulties in the past 25 years but the ongoing friction over the Thaad system is “the most difficult challenge” facing the two countries. But he expressed hope that things would return to normal as the two countries have strong “momentum” and “basis” for cooperation.

“What I would like to emphasize is that the two countries have made practical cooperation in diverse areas for the past 25 years and that it has created practical benefits for their people,” he said. “It has become a trend that cannot be reversed that South Korea and China will advance their ties in a stable and healthy way and it is what everyone wants.”

Former Chinese Foreign Minister Li Zhaoxing stated that the past 25 years since both established diplomatic ties have seen significant progress in many areas based on “mutual understanding and respect.”

He still noted that there have been challenges but such efforts as public diplomacy could help overcome those difficulties. “Marking the 25th anniversary, I hope the two will muster the soft power and positive energy from public diplomacy and overcome the challenges and move relations in a healthy way once again,” he said.