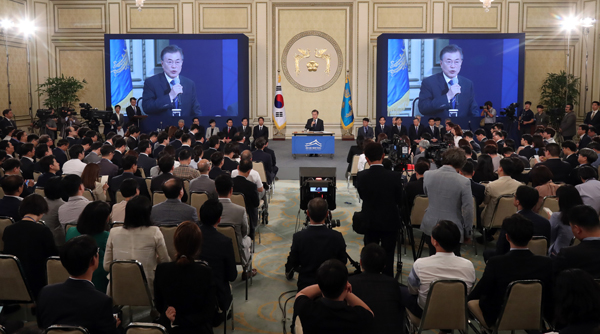 President Moon Jae-in answers questions from reporters at a press conference marking the 100th day of his administration at the Blue House on Thursday.[YONHAP]

“I think the red line is when North Korea completes intercontinental ballistic missiles and weaponizes them with nuclear warheads,” Moon said. “And the North is nearing that red line.”

But he said there will not be war on the Korean Peninsula, stressing that the United States has promised to seek the South’s consent before taking any military action against the North.

Moon addressed a wide range of issues including the latest security crisis in a press conference marking his 100th day in office. Tensions on the Korean Peninsula escalated in recent days, particularly after Pyongyang’s threat to draw up plans for “an enveloping fire at the areas around Guam” by launching ballistic missiles. U.S. President Donald Trump warned that the North would face “fire and fury” if carried out the threat.

Moon said the North will face tougher sanctions if it stages another provocation. “And the North won’t be able to endure it,” he said, “I want to warn the North that it must stop this dangerous brinkmanship.”

But he assured the public there will not be another war on the peninsula. “I will stop a war at all costs,” he said. “And it is the international community’s agreement that the North Korean issue must be resolved peacefully in the end.” The latest sanctions on the North are meant to prevent a war, Moon said, explaining that they are intended to force the North to negotiate.

“Furthermore, only South Korea can decide a military action on the Korean Peninsula,” Moon said. “Without our consent, no one can decide to take a military action. The United States and President Trump have promised to consult with us and seek our consent for all options they will take against the North. This is a firm agreement between South Korea and the United States, and I want the people to trust my word that there will be no war.”

He said the U.S. is entitled to take measures if the North acts aggressively toward it, but the South’s permission is necessary for military action on the peninsula. “Even if the United States takes a military action outside the peninsula, I believe the United States will still consult with us in advance if it will escalate inter-Korean tensions. I believe that is the spirit of the Korea-U.S. alliance.”

Moon also dismissed concerns that Trump will follow through with his threats to the North. “I don’t think they were made with an absolute intention for a military action,” Moon said. “I want to assure that Seoul and Washington are having enough communication and agreement on this.”

Moon admitted his offers for inter-Korean talks were all snubbed by Pyongyang. But he expressed a reluctance to send a special envoy to achieve some kind of breakthrough.

“To have talks, we need the right condition and a guarantee that the talks will produce a good outcome. At the least the North must stop additional provocations to create the conditions for talks,” he said. “If the conditions for talks are created and if it will be helpful to improve inter-Korean relations and resolve the nuclear crisis, then I will consider sending a special envoy.”

During the press conference, attended by 216 reporters from domestic and foreign media, Moon was questioned by a Japanese journalist about his position on relations with Japan, particularly the ongoing efforts to address Japan’s wartime sexual slavery and conscription of Korean laborers.

He also said the Foreign Ministry is reviewing the legitimacy of the controversial 2015 agreement between Seoul and Tokyo to settle the comfort women issue, hinting at a possible annulment. The deal was concluded by the governments of now-impeached President Park Geun-hye and Japanese Prime Minister Shinzo Abe in December 2015. Moon has repeatedly expressed his own doubts about that arrangement.

“A Foreign Ministry taskforce is investigating the process of how the two sides reached agreement and evaluating its contents,” he said. “After the review is over, the ministry will make a decision on what to do with it.”

He said Koreans subjected to forced labor during World War II and colonial times have not been fully compensated by the 1965 treaty. “The agreement between the two governments cannot infringe upon individual victim’s right,” he said. He cited Constitutional Court and Supreme Court decisions that the forced laborers have valid rights to seek compensation from Japanese companies through civil suits.