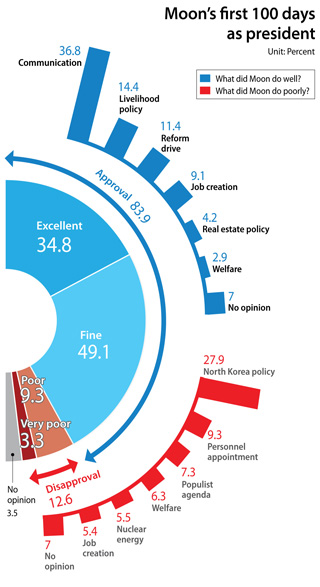 President Moon Jae-in enjoyed an approval rating of 83.9 percent as his administration entered its 100th day Thursday, according to a poll conducted by the JoongAng Ilbo, giving him the momentum to carry out his agenda.

Among those who disapproved of the president, 27.9 percent said he has failed with his North Korea policy given the escalation of tension on the peninsula, which has been stoked by dire threats by leaders in both Pyongyang and Washington and the North’s two intercontinental ballistic missile (ICBM) tests last month. Meanwhile, 9.3 percent pointed to a series of controversies over cabinet minister appointments as the key reason for their disapproval, and 7.3 percent said Moon was pursuing a populist agenda.

Concerning the deployment of the U.S.-built antiballistic missile system known as the Terminal High Altitude Area Defense (Thaad), designed to intercept North Korean missiles, an overwhelming 62 percent said they support its deployment, while only 28 percent said they are against it. Moon recently announced his decision to set up four remaining launchers for the system in the wake of the North’s ICBM test on July 28.

But among supporters of the ruling Democratic Party, support was only at 53.7 percent. Among those who voted Moon in the May 9 election, 54.3 percent said that they support the deployment, while 35 percent said they oppose it.

A majority also support Moon’s two-track approach to North Korea, whereby he intends to levy pressure and sanctions on the North while trying to resume dialogue, with 62.9 percent of the respondents in favor and 20 percent saying dialogue should come before pressure. Only 14.9 percent expressed support for a hardline stance, saying Seoul should put in place tough sanctions on the North for its nuclear and missile ambitions. Regarding Moon’s agenda of having Seoul take a leading role in setting the tone in dealing with Pyongyang, 60 percent expressed support, while 33.7 percent opposed it.

One policy area that was evenly divided between support and opposition was Moon’s attempt to wean Korea off nuclear energy by closing down old nuclear energy plants.

When asked whether they support Moon’s decision to suspend the construction of the new Shin Kori 5 and 6 reactors in Ulsan before a nine-member commission releases the outcome of its review, 41 percent of respondents said the construction should be resumed, while 39.6 percent agreed with the government that it should be stopped and 19.4 percent said they had no opinion.

During a cabinet meeting on June 27, the administration decided to temporarily suspend construction of the two reactors and designated a nine-member commission to review the issue and produce a recommendation within three months. The decision has drawn backlash from opposition parties, which contend that phasing out nuclear power will raise utility bills and kill Korea’s export of nuclear technology.

Support or opposition for nuclear energy appears to be dependent, at least partly, on one’s political leaning, the poll shows. Among those who support the conservative Liberty Korea Party, 75.2 percent said the suspended construction should resume, whereas among DP supporters, only 53.1 percent supported resuming construction.

On the government’s so-called Aug. 2 Real Estate Regulation, which aims to rein in property speculation and cool down soaring prices in Seoul, 52.6 percent voiced support, saying it was an “effective” measure, while 24.7 percent said the regulation went too far.

Regarding Moon’s effort to reach out to the opposition, 64.4 percent positively assessed such efforts, while 26.2 percent disapproved.

The poll was conducted between Monday and Tuesday, surveying 1,000 adults nationwide with a confidence level of 95 percent and a margin of error of plus or minus 3.1 percentage points.

In an analysis of Moon’s formal remarks by the JoongAng Ilbo, which amount to 170,000 words total over the past 100 days, the most-mentioned term was “job creation” (196 times), followed by “North Korea” (138 times), and “peace” (120 times). The analysis was jointly conducted with Seoul National University’s journalism department.

An analysis of internet searches of figures related to the Moon government showed that Foreign Affairs Minister Kang Kyung-wha was searched for the most, according to Naver Trend, which examined search results on the country’s largest internet portal. Kang is the country’s first woman foreign minister.

The second-most-searched person was Park Ky-young, who resigned Friday after serving four days as head of the Science, Technology and Innovation Office. The science community said she was unfit to serve in the vice-ministerial post, given her involvement in Korea’s largest scientific fraud case, the infamous Hwang Woo-suk scandal of 2005.