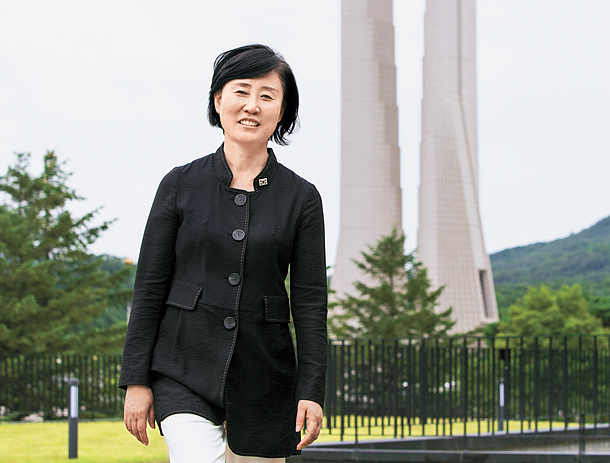 Yun Ju-keyng, president of the Independence Hall of Korea in Cheonan, South Chungcheong, at the venue as it celebrates 30th anniversary this year. [INDEPENDENT HALL OF KOERA]

In celebration of the 30th anniversary of the Independence Hall of Korea in Cheonan, South Chungcheong, the venue plans to make a book about independence activists and distribute it to 100 Korean language schools across the United States, starting in September.

Yun Ju-keyng, president of the hall, said in an interview that the book will help some 14,000 ethnic Koreans learn about Korean history.
The Independence Hall of Korea celebrated its 30th birthday on Aug. 15, the 72nd Liberation Day.

The funding for the building, which took three years to complete, came from public donations, sparked after a Japanese history textbook controversy in 1982. Thus far, the hall has seen 50 million visitors.

Yun is eldest grand-daughter of Yun Bong-gil, a Korean independence activist who set off a bomb in Shanghai’s Hongkew Park in 1932, killing two Japanese dignitaries and seriously injuring three others.

He was executed by firing squad later that year and posthumously awarded the Medal of Order of Merit for National Foundation in 1962 by the Korean government.

Yun said the hall she is running is the epitome of what Koreans can do once they unite, referring to the donations made.

“The Independence Hall of Korea is owned by the Korean people,” she said in an interview on Aug. 12. “Children opened up their piggy banks and seniors in their 70s and 80s gladly came up with pocket money for the construction.”

She added that those ordinary citizens who strived not to forget the Korean language and culture under the Japanese colonial rule laid the ground for Korea’s independence.

For the first time since its opening, the hall will transform the third and fourth floors, which used to serve as office space, into education and exhibition venues. The construction is now under way and the new space will open next month.

The first exhibition will be about the nationwide donation movement to pay the national debt 100 years ago. At the time, Japan lent 13 million won ($11,386) to the Korea Empire in an attempt to subjugate Korea economically.

Remodeling in other parts of the hall will continue through 2023, Yun said.

“The hall will change from a space that simply delivered knowledge to the one that can move you,” said Yun.

She proposed other Asian countries that suffered under Japanese imperialism should join forces to oppose Japan’s tilt toward conservatism.

“Japan should show the kind of repentance that Germany has showed,” she added.