A drone flies above a suburban neighborhood holding onto a package from Seoul. As the unmanned aerial vehicle spots its destination, it slowly descends and drops the package right into the drop box. The customer types in a password sent via text message prior to delivery to take the package and the drone returns to its base station to recharge before its next delivery.

This is the future that CJ Logistics hopes to create with upgrades to its drone, dubbed CJ Sky-Door.

“As larger competitors like Amazon and JD.com continue to release plans to use drones for last-mile delivery we plan to continuously focus on development in the long term though there are still regulatory and technological hurdles in implementing drone delivery on-site right now,” a spokesperson from the company said.

Technological developments have led to changes in the retail industry and consumers’ purchasing patterns, prompting logistics businesses to use more robots for warehouse management and last-mile delivery services and also to expand the use of big data analytics to track the overall delivery process.

Technology research firm Technavio predict that the global logistics robots market will grow steadily at a compound annual growth rate of about 33 percent from 2016 through 2020.

“The growing online shopping space is the primary growth driver for this market,” Technavio said in the Global Logistics Robots Market report. “The market is expected to spur the demand for a faster and more efficient delivery mechanism owing to a growing consumer preference towards same day delivery purchases.”

Like the digitization wave in manufacturing represented by Germany’s Industry 4.0 initiative, logistics is entering a stage of “Logistics 4.0,” according to global market research firm Roland Berger in December 2015. Though the definition of smart logistics is still vague, the firm anticipates that the number of processes requiring human intervention is set to decrease rapidly. 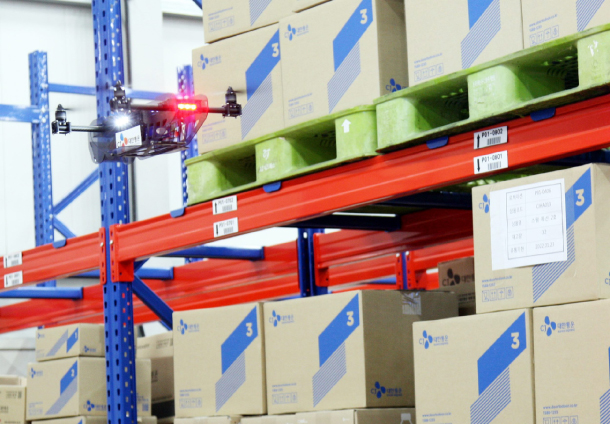 Ever since Amazon first introduced the idea of delivery via drone, the unmanned vehicles have represented the future of the logistics industry.

Amazon’s Prime Air, designed to deliver packages to customers’ doors in 30 minutes or less using drones, is preparing to launch though it is currently tied up in U.S. Federal Aviation Administration regulations.

China’s online shopping and parcel service company JD.com also announced its goal to launch drones for delivery over a larger area in China.

According to a report released by the Korea Information Society Development Institute (KISDI) during the first half of the year, the Chinese company has announced ambitious plans to establish 150,000 hubs for drone delivery in China, placed roughly 10 kilometers apart. The company’s main plan is to ship goods via drone to hubs across rural China and let the existing parcel delivery services in each area deliver packages to their final destination.

“Due to the size of China and its population, online retailers and logistics companies’ are increasingly interested in smart logistics,” said Lim Hyung-chae, a researcher for KISDI.

JD.com is also engaged in developing unmanned delivery robots with six compartments for parcels. The 1 meter (3.3 foot) wide and 0.6 meter tall robot moves on preset routes, but it has the ability to avoid obstacles like passersby and pets, according to the company.

In Korea, CJ Logistics is showing some progress in developing futuristic delivery options.

The company has developed drones for use inside warehouses. These devices are currently being tested and the logistics giant hopes to roll them out by the end of this year. The warehouse drones are capable of learning routes to fly inside the warehouse and will be used to monitor inventory.

“There are a lot of things to consider such as how and where to make drone stations, how to charge drones and how to make the overall process safer and we can say there’s still a long way to go for commercialization,” a spokesperson from CJ’s logistics unit said.

There are complicated issues surrounding drone deliveries aside from the technology. The company must get approval from the government to fly drones in certain areas and city planning must also be changed considering in-city drone deliveries as it is currently too dangerous to fly drones in crowded areas like Seoul with high rise buildings and other obstacles that drones could crash into.

People often assume logistics is just the delivery of goods from warehouse to doorstep. However, the process is much more complex and involves numerous parties as goods are stored in a warehouse before being picked, packaged, loaded onto trucks and moved around cities and even countries, often through a number of regional facilities, before the final knock on a customer’s door.

This is where IT companies come in. They have the expertise in software-based solutions that can be applied to logistics, like AI, big data and Internet of Things technology.

A notable player in visualizing the overall logistics process is Samsung’s IT service unit Samsung SDS, which jumped into the logistics solutions business in 2010 and started making revenue from 2012 with its big-data and AI-based solution dubbed “Cello.”

When the Korea JoongAng Daily visited the company’s Global Control Center for logistics management located in Pangyo, Gyeonggi on Thursday there were 12 large screens depicting data like real-time trade volumes and trade routes by air, sea and land.

A large world map monitors natural disasters globally and any irregularities in overall delivery movements - especially at sea - so any delays can be reported to end customers or raised with partnering shipping companies immediately.

The data at the center can be shared with logistics sites in over 31 countries and can also be viewed through smartphones, the company said.

“Unlike with other shipping companies, our customers experience minimal disruption as we are able to run risk simulations based on real-time data we have collected,” said Shin Woo-yong, vice president of the product planning group at Samsung SDS. “In the past, cargo owners had to wait until shipping lines called them to notify them that delivery would be delayed before they could do anything about the situation.”

The most recent upgrades to its service include applying blockchain technology to logistics.

SDS in June joined a consortium with local logistics and IT service companies, as well as government agencies, to implement blockchain technology in shipping and logistics. Partners in the consortium include the Korea Customs Service, the Ministry of Oceans and Fisheries, Hyundai Merchant Marine and IBM Korea.

Blockchain is a technology that verifies and encrypts transactions to store them in distributed ledgers. It is best known for its application to digital currencies such as Bitcoin. The system ensures transparency and security of digital contract documents while slashing costs of storage as it does not require expensive servers.

Once blockchain is fully adopted, everything from production to storage and shipping will be recorded in detail, rendering it impossible to falsely advertise or change production and expiration dates of products.

SK Group’s IT service unit SK C&C is developing a similar service by forming a joint-venture with Jusda, a logistics subsidiary of Taiwanese Foxconn Technology Group. As it has its own AI system, the program will help forecast logistics demand for customers and find optimal routes and delivery methods for the packages. It also is developing a blockchain-based logistics system that would allow multiple parties to share and manage data related to cargo simultaneously.

After cargo is delivered via plane, ship or truck to local distribution centers, last-mile delivery is the process that actually brings a package to the customer’s doorstep.

Last-mile delivery is considered by industry experts to be one of the most important stages of the logistics process as it is the point when couriers interact face-to-face with customers. It is important that nothing goes wrong at this final stage and goods are delivered intact and on time.

The company’s “Vroong Transportation Management System” uses an algorithm to find the closest driver to a destination and automatically matches orders with nearby riders. Human intervention is only necessary at peak times. Once a driver accepts an order, details related to the destination, what time the delivery must be completed and the contact details for the distributor and customer are all routed to an app on their phone.

“Without the app, we needed to stop every time a new order destination pops up,” said Kim Dong-ju, a driver for Mesh Korea. “Now order processing speeds have become much faster and more convenient.”

Just last month, Naver backed the start-up with an investment of 24 billion won. The money will be used to ramp up the delivery infrastructure nationwide.

“Over the last few years, customer expectations for delivery services have changed and their needs are due to get even more complicated in the future,” said Rhyu Joung-bum, CEO of Mesh Korea. “Last-mile is where we can differentiate our service.”