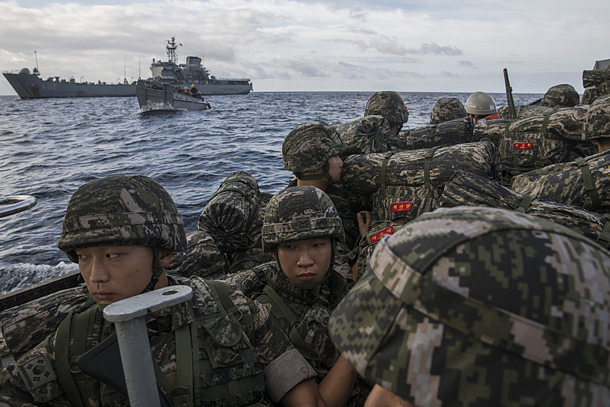 South Korean Marines head to Ulleung Island for their biggest-ever training on Saturday to defend the eastern island. [YONHAP]

South Korean Marines have started their largest-ever training to defend the eastern island of Ulleung, the Marine Corps said Sunday.

Ulleung Island, some 120 kilometers (75 miles) off the eastern coast, is located near Dokdo, a set of rocky islets owned by Seoul but claimed by Tokyo. It is the country’s eighth-largest island with a population of 10,000.

More than 90 Marines are participating in the monthlong drills that kicked off last Friday. It marks the first time for a company-size number of Marines to be mobilized for the regular practice that began in 2013. A platoon joined previous ones.

“The exercise this time focuses on improving the capability to carry out the mission of rapid response forces,” the Marine Corps said. It cited the complicated and peculiar geographical nature of such an island.

The troops were deployed to Ulleung Island on the Navy’s tank landing ship over the weekend for the four-week drills, which include live-fire shooting, rappelling and rapid engagement.

They also plan to conduct a disaster-relief training.

“Through the Ulleung Island deployment exercise this time, we will maintain the capability and posture to perfectly complete a mission under all operational conditions,” said Lt. Kim Hyung-do, chief of the company. South Korea is considering the deployment of a Marine Corps unit to Ulleung Island on a rotational basis.