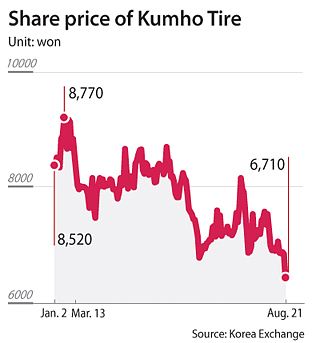 If Doublestar’s demand is accepted, Kumho Group Chairman Park Sam-koo will be given the right to buy back the Kumho-branded tire unit. By making changes to the original terms of the contract, Doublestar will change the nature of the agreement and open the door for Park.

If Park decides to exercise his priority rights, Doublestar’s attempt to purchase the Korean tire company will end with nothing.

So, what was Doublestar thinking?

When Doublestar inked the deal with Kumho Tire creditors in March they agreed to pay 14,389 won per share. On that same day, March 13, shares closed at 8,770 won - the Chinese company had paid a 64 percent premium on each share in exchange for taking management rights.

On Monday the tire company’s share price fell to as low as 6,710 won per share. It is the lowest price set during the past year. From the day the contract was inked until Monday, the share price has fallen by 23.5 percent despite the bullish Kospi, which rose 11.4 percent during the same period.

If Doublestar maintains its bid price for acquisition, it is essentially giving a 114 percent premium for the management rights, which could quite reasonably be considered excessive.

Under the sales and purchase agreement there is a clause that allows the acquirer to walk away from the deal if the tire unit’s operating profit falls by 15 percent or more year on year.

Also, as Kumho Tire’s labor union has filed suit against the company due to a wage dispute, Doublestar has the potential burden of paying litigation costs. Most merger and acquisition deals include terms to compensate for contingent liabilities, which refers to potential liabilities in the future under certain circumstances such as litigation expenses.

At the second trial between the tire maker and the labor union held Friday, the court judged in favor of the company but no one’s sure of the final judgement to be made by the Supreme Court.

While creditors of Kumho Tire will be providing damage compensations for contingent liabilities, they set the ceiling at 16.2 percent of the tire unit’s sales price, or 154.7 billion won.

Doublestar’s idea is that the creditors discount the sales price of the tire unit by the compensation ceiling they set up, as if the labor union wins in the Supreme Court they are going to have to part with this money anyway.

In turn, the Chinese company says it will remove both contingent liabilities and the clause that says it can walk away from the deal from the sales and purchase agreement.

The 800 billion won offer would give about an 80 percent premium on the current share price of Kumho Tire.

Still, even if the creditors agree to Doublestar’s offer, Park will once again have the right to buy the company back before Doublestar has a chance. Park is likely to have another shot at taking back the Kumho-branded tire company.

Doublestar is gambling on Park being unable to secure the 800 billion won needed to acquire the unit. He previously gave up the right to buy back the company as he failed to find the money to make an offer without forming a consortium to prop him up.

According to industry sources, creditors are likely to let Park form a consortium without any restrictions this time to avoid the legitimacy of the acquisition process being constantly called into question by the Kumho Group. This may mean that Park is able to afford to buy back the tire maker.

Another problem is that 35 percent of Kumho Tire’s production capacity is in China, based on data accumulated until last year. Though the Chinese operation has plenty of production potential, the facilities haven’t been able to run at capacity due to a lack of sales in the country. A major cause of the company’s recent deficit is a sales slump in China.

Kumho Tire creditors expect acquisition of the tire unit by a Chinese company to boost its sales in the country and speed up its performance recovery. If Doublestar’s acquisition plan falls through and Park buys the tire maker there could be retaliation from China.

“I’m not sure if there would be any strategic or financial investors participating in the consortium led by Park considering these circumstances,” a source from Kumho Tire’s creditors said.

On the other hand, Park’s political influence cannot be ignored in the ongoing deal. There have been a number of protests against the Doublestar dealing involving current and past employees of Kumho Tire, civic groups and foreign buyers. Protests have been especially strong in Gwangju where Kumho Tire’s factory is located.

Lawmakers from Gwangju, including the city’s Mayor Yoon Jang-hyun, have expressed concern that Doublestar could take Kumho Tire’s technology and abandon its Korean operations. Backed by these concerns over a Chinese company acquiring the tire maker, experts say Park’s chance of taking back Kumho Tire cannot be ruled out.