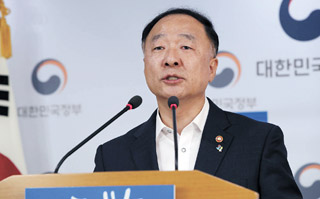 A senior official of the Moon Jae-in government announces on June 27 a suspension of the ongoing construction of the Shin Kori 5 and 6 nuclear plants. [YONHAP]

Living organisms need energy for all living functions, including reproduction and growth. A stable source of energy is indispensable to all living things.

Human beings obtain energy from food. The plants we eat grow through a process of photosynthesis. Therefore, our basic energy source is the sun.

Radiation from the sun powers solar panels that generate electricity. The earth and ocean movements are all activated by the solar engine. Underground fuel sources of coal, oil, or natural gas result from geological and chemical activity from the storage of sun energy over millions of years.

Geothermal heat, tidal power from the gravitational pull of the moon, and nuclear power are exceptions. Geothermal and tidal energy so far have not contributed much as energy sources, but nuclear power has. The Earth will one day run out of fossil fuels, but nuclear power is limitless. Nuclear reactors are already a reliable source of electricity. When we have the fusion process at hand, mankind would have unlimited access to unfathomable amounts of energy.

Humankind has incessantly struggled to achieve stable energy sources. Since food is not evenly produced, human communities have been fighting over food. The chemical energy from food is expensive. It costs 20 times more than the electricity generated from nuclear energy. Demand for power-generating sources naturally has been high. As fossil fuels are sourced in only certain regions, the fight for them has been more violent than for food, often causing wars.

The Pacific War, for instance, was fundamentally a war over energy. The Great Depression hit Japan hard in the late 1920s when its industrial development was taking off. Japan hoped to use Manchuria for its rich coal resources. The Manchuria invasion led to the Sino-Japanese War. Fearful of Japan’s expansionist campaign, the United States banned steel and oil exports to Japan in the 1930s.

Japan panicked over the sanctions. It heavily relied on U.S. oil imports for its war with China. Its naval force was hit hardest. Its fuel stocks could not last two years. It decided to go to war with the United States by securing oil from the East Indies, now called Indonesia. The Pacific War that eventually led to Japan’s doom was triggered by Japan’s lack of energy sources.

South Korea is one of the most resource-poor countries. It relies on imports for everything except rice. It is not easy to increase food production because of the mountainous geography and high population density. It runs into trouble if crops fail and prices jump due to weather disruptions.

Korea is even more vulnerable on the energy front as it does not produce any oil and gas. During the oil shock of the 1970s, ministers had to beg Middle Eastern nations to sell crude to us.

It is therefore crucial for every government to ensure the stability of energy supplies. It is not just the cost — a stable pipeline is crucial. The Middle East is politically unstable. Moreover, supplies arrive via the South China Sea, where China is asserting territorial claims.

The incumbent government promises a huge amount of subsidies for the rice industry. Yet it is out to power down nuclear reactors across the country, causing jitters in our energy supply. The government must seriously reconsider the contradiction in its resource policy.