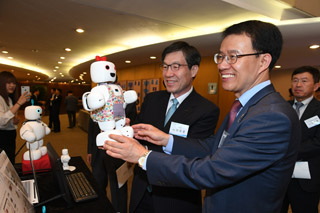 Kwon Oh-joon, center, the chief executive of Posco, plays with piBo, a robot developed by the start-up Circulus, at the company’s 13th Idea Marketplace at the Posco Center in southern Seoul. [POSCO]

Posco, Korea’s largest steelmaker, has been actively participating in a national job creation project and is determined to hire 6,000 permanent workers, 1,500 annually, by 2020. The purpose of this employment expansion is to secure a talented workforce, one of the most fundamental requirements for the company’s future growth, following the trend of the fourth industrial revolution.

Posco has already been recruiting roughly 1,000 people annually. However, it decided to further expand hiring based on the resolution that the company should have enough outstanding individuals to lead research and development in sectors that are expected to be future growth drivers, such as lithium and anode materials, and smart factories that incorporate artificial intelligence and the Internet of Things.

The steelmaker hopes to attract people with a thirst for challenge and experience in diverse areas. Their majors will not be a significant factor, and various methods of recruitment will be used, including university recruitment, commissioned officer hiring and open recruitment.

Posco is also playing a leading role in nurturing small and medium-sized businesses by hosting events like “Idea Marketplace.” The 13th iteration of the event took place on June 21 at the Posco Center in southern Seoul.

The steelmaker selected 10 ventures to support this year. The program’s goal is to provide young entrepreneurs with investment to cover start-up expenses and give them a sense of security to enable stable growth.

Posco started the Idea Marketplace in 2011 and discovered 142 companies through the event, helping to create 574 jobs. Among these, Posco invested 9.6 billion won ($8.5 million) in 63 companies and connected 37 with outside investors, helping them receive 93.8 billion won in secondary investment and R&D support.

On April 28, Kim Dong-soo, executive vice president and head of the technology management office at Posco, signed a business agreement with Park Gun-su, director general of industrial technology policy at the Ministry of Trade, Industry and Energy, and Chung Jae-hoon, president of the Korea Institute for Advancement of Technology, to expand technology sharing. Many representatives of small and medium-sized enterprises (SMEs) were also present.

As a result of this agreement, Posco executed the gratuitous transfer of 83 patents on 69 technologies to 24 companies, allowing non-exclusive rights. “Posco hopes this business agreement can be a positive stepping stone for building a cooperative system between big conglomerates and SMEs,” Kim said, “and to contribute to the improvement of the technology competitiveness of SMEs.”

Earlier in February, Posco made 300 pieces of their high-quality technology available to SMEs, including technology related to steel, machinery and eco-friendly energy production.

The company is also supporting young job seekers from underprivileged populations by offering free tutoring on technologies central to the fourth industrial revolution, including artificial intelligence, big data and the Internet of Things.

The program consists of two levels: basic and advanced. On the basic level, anyone interested in a particular field can receive training from Posco in the form of an eight-week massive open online course. The program includes lectures that can be viewed on a computer and assignments that can be completed at home.

On the advanced level, Posco selects about 100 job-seekers, particularly those from low-income groups, to participate in an eight-week program that includes consulting sessions on writing cover letters and giving job interviews.

Additionally, Posco has a customized program for people interested in working at Posco’s affiliates. The course runs for 10 weeks and includes sessions on technology that workers at the companies need to know, including steel manufacturing, metal welding and crane operation.