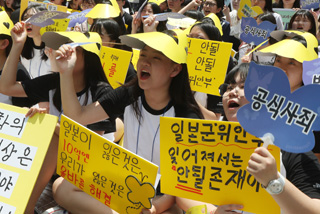 A group of Korean students calls for a renegotiation of the agreement struck by the Park Geun-hye government last December with Japan over the “comfort women” issue. [YONHAP]

Does a political decision that goes against public sentiment really deserve to be cursed? In 1996, when the introduction of Japanese pop culture was being discussed in Korea, the public was cold. A survey found that only 25.5 percent supported the cultural opening, while 52.5 percent opposed it. They were concerned that Japan’s indecent culture would pour in. But in 1998, the government decided to open the door. It was during the Kim Dae-jung administration.

Now, it is Korean pop culture that has swept through Japan, and no Japanese products, other than anime, have gained popularity in Korea.
The Korea-Japan agreement on the “comfort women” issue has been considered an anti-Korean act on par with the shameful Korea-Japan Treaty of 1905 that paved the way for Japan’s colonization of the peninsula. With the movement to abolish the comfort women agreement spreading, public support for renegotiation has surged from 60 percent to 85 percent.

It is clearly wrong that the agreement was made without asking for the opinions of comfort women victims, but it might be misleading to say that many of them oppose it. In an interview with the Washington Post in June, President Moon Jae-in said the Korean people do not accept the comfort women deal and that victims especially reject it.

The Reconciliation and Healing Foundation was set up to implement the agreement, and the foundation claims that 36 of the 47 survivors it has contacted accepted or agreed to accept the 100 million won ($88,000) compensation. It asked each victim four times on average about their willingness to accept the compensation and sometimes recorded the responses to prove that there was no coercion. So it is not that a majority of the survivors reject the agreement.

It might be problematic to reverse a diplomatic agreement made during a previous administration. It is hard to ensure that the next agreement will not be broken again. When it was made in late 2015, the public generally viewed it as urgent to improve relations with Japan, with 67.2 percent of Koreans and 67.8 percent of Japanese saying Seoul-Tokyo relations needed improvement. There was also a consensus that the average age of victims, 90, made the resolution’s expediency urgent. Between a prompt improvement in relations through compensation for victims, and a satisfying apology and compensation from Japan, it is questionable whether choosing the former really deserves criticism.

Hans Kelsen, the acclaimed jurist of the 20th century, said that when two values clash, it is hard to decide which one is more important with reasonable perception. No one can say for sure which option is more just when two contradicting values collide. It is true that the comfort women deal is faulty by nature. However, completely scrapping it is another story. Experts on Korea-Japan relations say it may be impossible to reach a better solution in the current atmosphere.

Japan’s Shinzo Abe administration is largely responsible for the growing calls for renegotiation, and the prime minister has not shown sincerity. In October 2016, when asked if he intended to write a letter of apology to the comfort women victims, Abe flatly said, “We have absolutely no such intention.” So it would be better to supplement the existing agreement with the delivery of an apology from the prime minister.

It is unreasonable to start a fight with Japan when our neighbor could be a support base amid deepening tensions with North Korea.