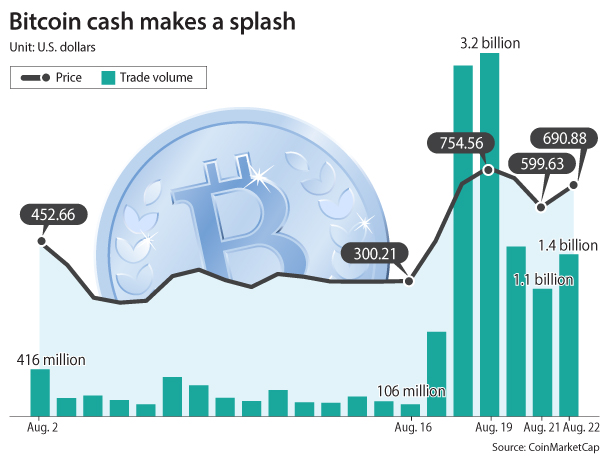 Bitcoin cash, the cryptocurrency born earlier this month, enjoyed a drastic surge in price over the weekend, pushed by strong demand in Korea.

The massive trade volume has made Korea the top cryptocurrency market in the world.

“The bitcoin cash offshoot, bitcoin cash, jumped to a record high near $1,000 Saturday in high trade volume, primarily from South Korea,” CNBC reported Saturday, when the price of bitcoin cash reached as high as $1,091.97 in session before closing at $754.56.

The 24-hour trade volume on Saturday for bitcoin cash was around $3.2 billion, and its market cap stood at $11.5 billion.

After bitcoin cash separated from bitcoin on Aug. 1 in an event known as the SegWit activation, the price of bitcoin cash reached over $700 the next day before falling in subsequent weeks. Up until Aug. 17, the value remained stable at around $300.

What initially triggered the rapid rise of bitcoin cash was a Twitter post from Wu Jihan, the Chinese co-founder of Bitmain, the largest bitcoin mining company in the world. The mining pool led by Wu’s Bitmain takes up about 20 percent of global bitcoin mining.

“Antpool will start to provide BCC mining option after at least one of SegWit supporters/fan pools start to mining BCC,” Wu tweeted Friday. Antpool refers to a mining operator under Bitmain. Larger mining volume leads to increases in the price of digital currencies.

While Wu’s comment gave the initial push, it was Korean traders who provided the momentum. The amount of general trading on Bithumb Saturday reached a record-high 2.6 trillion won. By comparison, the trade volume on the Kosdaq, Korea’s tech-heavy stock index, was 2.4 trillion won on Friday.

As of press time Wednesday, the 24-hour trade volume of bitcoin cash on Bithumb stood at $502 million, according to Coin Market Cap, a cryptocurrency data provider. The top three trading platforms for bitcoin cash were all Korean platforms - Bithumb, Coinone and Korbit. Together, they took up about 55 percent of all bitcoin cash trade globally.

“While it took years for markets in the United States, Japan and China to grow, the Korean digital currency market experienced an explosive growth this spring,” a source in the industry said. “It looks like most of the new investors are speculators expecting short-term profit.”

For such speculators, the digital currency market - unregulated and open 24/7 - is considered one of the best playgrounds for their money. Before digital currency, derivatives were seen as the big money maker. Daily trade volume on the local derivatives market was 45 trillion won in 2011, according to the Korea Exchange, the local stock market operator. Since then, the government has implemented various regulations in the market, and trade dramatically shrank to around 17 trillion won last year.

“Before regulations, Korea’s derivatives market was overwhelmingly the top globally,” the industry source said. “Now that speculators are flooding into the digital currency market, investors must be cautious since the price could take a rapid turn if speculators pull out their money after gaining short-term profit.”