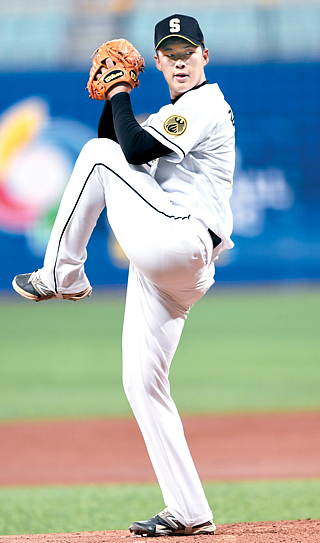 Kim Seon-gi pitches during an exhibition game against the Korean national baseball team prior to the World Baseball Championship in March. [KIM JIN-KYUNG]

At 25 years old, Kim Seon-gi has never once thrown a pitch in the Korea Baseball Organization (KBO). After five years in the United States playing in the minor leagues and two years playing for the Sangmu Baseball Team in Korea’s Futures League, Kim is finally ready to make his KBO debut. With the completion of try-outs on Tuesday, Kim is one of the favorites ahead of the rookie draft on Sept. 11.

During the KBO foreign league player try-outs on Tuesday, Kim pitched a fastball at 146 kilometers per hour (90.7 miles per hour). He also showed great control in his curve, slider and fork balls. Kim is most likely to be picked up by the KT Wiz, who have first pick in the upcoming rookie draft. If the Wiz don’t pick Kim he is very likely to go to the Samsung Lions, who have the second pick.

“I want to be the first pick because it means that the clubs acknowledge my ability,” Kim said. “But as of now, I’m just thinking about playing well in the KBO next season.”

After graduating from Sekwang High School, Kim chose to head straight to the United States in the hope of playing in the major league. Although he was the 49th Korean player to step onto the field in the United States, Kim never quite made it to the big leagues. He returned to Korea in 2015 after spending five seasons in the minor leagues. 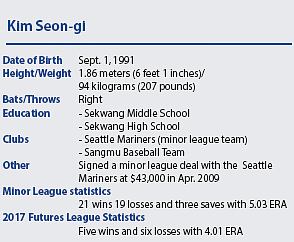 “It wasn’t difficult to live in the United States by myself but I just found it difficult to settle and I was very inconsistent,” Kim said. “I regret not getting into the big leagues once.”

Through his five years in the minor leagues, Kim appeared in a total of 125 games, starting in 40. He tried his hand at every form of pitching - starting, relief and as a closer. In Kim’s last season in the United States he appeared in 23 games, recording two wins and three losses with a 3.04 ERA. Once he returned to Korea, Kim joined Sangmu Baseball Team, where he got to sharpen his pitching while completing his military service.

“Compared to the players in the KBO, there is not a single area where he falls behind,” Park Chi-woong, the manager of the Sangmu Baseball team, said. “He will live up to expectation.”

And Kim himself is also fully prepared. During his first year with Sangmu, Kim struggled with his pitching, but as he played in more and more games, he taught himself how to pitch against different types of batters.

“I don’t get nervous on the mound,” Kim said. “Rather than getting afraid, I get more aggressive.”

Though Kim was rated as a pitcher that can guarantee at least 10 wins for a club next season, he believes that there’s still some room for improvement in the control of his pitches.

“He is very healthy both mentally and physically,” said Park. “He is at his best right now.”

For Kim, playing a full season is the top priority.

“Five years in the minor leagues was a stepping tool for me to develop as a player,” Kim said. “It took me a while, but throughout that period I got more mature. In the KBO, I want to play the full season. Ten wins are good, but not getting any injury is the most important thing.”