One China, one Korea

One China, one Korea 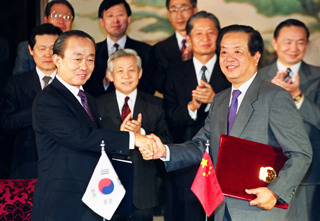 The moment of the establishment of the diplomatic relations between South Korea and China in 1992.

A few days ago, a Chinese scholar who completed his master and doctorate programs in Korea and worked at a research institute under a private university came to say goodbye. He was returning after spending 13 years in Korea, and he sighed with regret as we talked. He was to be working for a Chinese institute, and he told me about the interview. One of the interviewers asked why he was moving to China after establishing a career in Korea.

Korea and China are celebrating the 25th anniversary of diplomatic ties, and as China openly retaliates economically over the Thaad deployment, the foundation of the two countries’ relationship is severely damaged. The ceremonies are held separately, and the shadow of distrust is growing. Five years ago, the 20th anniversary banquet was held at the Great Hall of the People, and Xi Jinping, then vice president, was in attendance. Attendees joked they were looking forward to the dinner with Xi as president five years later. Back then, no one expected the 25th anniversary would be celebrated so humbly.

Korea and China are bound in a mutually supplementary trade structure, and Korea could share the fruits of China’s explosive economic growth. The problem has been politics. While Korea severed ties with Taiwan and accepted the one China policy, China still stands by the two Koreas policy.

Beijing therefore maintains equal distance with both South and North Korea. While China claims that it is no longer blood brothers, but in a normal state relationship, with North Korea, nothing has essentially changed, as China and North Korea are bound by the joint defense treaty to share strategic security interests.

Korea-China relations have been good at keeping economics and politics separate, but now we are approaching a crossroads.

We cannot expect more than superficial ties with China as long as China supports a two Koreas policy. We need to prepare for resetting Korea-China relations in the long term.

China has stuck to a consistent Korean Peninsula policy for the past 25 years. We can begin by establishing a diplomatic lineup with experts in international dealings.