Guard at posh apartment slept by toilet, then fired

Guard at posh apartment slept by toilet, then fired 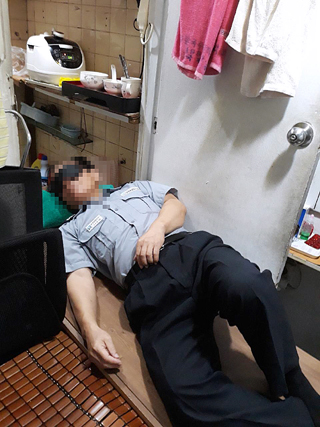 A security guard of an apartment in Gangnam District, southern Seoul sleeps in his office, using a toilet as a pillow. [LEE HYUN]

Security guards at a posh apartment complex in Gangnam District, southern Seoul, were found to have cooked and slept in the bathroom of their office due to sheer lack of space.

“Because of the stench from the toilet, I always have to leave the door to the office open, otherwise I can’t eat or sleep,” said a 68-year-old security guard, surnamed Kim, Wednesday as he sat in the office, which is just big enough for two people to sit in. Security guards in apartments in Korea often sleep and eat in the office they work in, keeping post 24 hours a day.

At the office used by Kim and another guard were one small desk and a chair. It was connected to the bathroom, which had a squat toilet. The guards had remodeled the bathroom into a kitchen, and it was being used for both purposes. On one side of the toilet were makeshift tables with a rice cooker, ceramics, spoons and chopsticks. A frying pan and a pot hung on the wall.

“At night, we don’t have space enough in the office to stretch our legs,” Kim said, “so what we do is we open the door to the bathroom, and use the protruding part of the squat toilet as our pillow.” 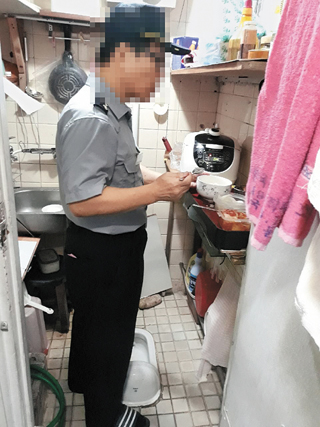 He also eats in the bathroom, which he uses as a kitchen. [LEE HYUN]

Suites in the complex each cost about 1.3 billion won ($1.1 million). The complex has a lounge for guards, but it remains locked most of the time, Kim said, and only the security manager has the key.

“When I first came here, I was appalled at the state of the office,” Kim said. “But as I am so old, I don’t know who else will hire me. So I have to deal with whatever difficulties are here.”

Kim said it is hard to find time to rest during the day as he is continuously called by residents who need him to organize parking spaces, deal with double-parked cars or register incoming mail and packages for the 120 households.

“What keeps me going is actually the kindness shown by some residents here,” he said. But what troubles him the most, he said, is a quarrel he is having with his management company.

On July 12, the company told Kim to hang 60 national flags on the apartment for Constitution Day, which falls on July 17.

“I couldn’t handle the job all by myself,” he said. “I moved the flags into the apartment, and it was dark already by then. So the other security guard hung them the next day.”

The management office asked Kim to file a report explaining why he did not hang the flags the day before.

“The Gangnam District Office said to start hanging up the flags from July 14,” he said. “So why should I write a report on myself for failing to hang up the flags earlier than that day?”

Kim said the management company employee called him “senile” and other names, though the company denies it. Kim filed a petition to the National Human Rights Commission of Korea and the Blue House, complaining that the company gave him orders he could not complete under what he called poor working conditions at the office.

On Aug. 11, the management company dispatched Kim to another apartment in Wolgok-dong, Seongbuk District, central Seoul.

“We’ve resolved the issue over the national flags and our employee apologized,” said an employee of the management company. “But on another issue, Kim tried to influence the opinions of residents to switch out the security manager. So we decided to dispatch him elsewhere, to another apartment and another management company.”

But Kim’s new workplace is about two hours from his home in Segok-dong, Gangnam, and he would have to leave home before 4 a.m. to get to the office by 6 a.m., when his shift starts. Given this, the management company of the Wolgok-dong complex said it would be hard to hire Kim.

“I don’t know what more we can do for him,” said an employee of Kim’s former management company.

Kim still shows up at the office of the apartment in Gangnam every other morning regardless.

“I’m on the waiting list [to be dispatched elsewhere], but I’m showing up because I don’t want to lose my job,” Kim said. “Just know this, that a lot of us security guards put up with harsh conditions and directions that are beyond our duties often because we don’t want to get fired.”