The problem with cage-free

The problem with cage-free 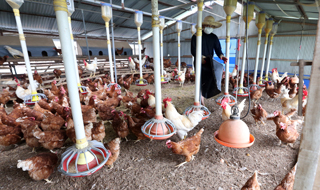 Greed, cruelty and the paradoxical problems of utopia are well portrayed in notably dystopian tales like George Orwell’s “Animal Farm,” but a real-life catastrophe is playing out at the capitalist factories producing our eggs, which have been found to contain pesticides. They are the haunting revenge of layer hens, brutally slaughtered after being forced to lay eggs day in and day out crammed in excruciatingly small cages.

Animal rights have suddenly come into focus with the egg scandal, which has coincidentally broken out during the Year of the Chicken. Most would agree with calls for better treatment of animals and envy New Zealand’s legal reforms in 2015 that ensure animal welfare by recognizing common farm animals like cows, pigs and chickens as sentient beings capable of feeling and perception.

But that is a luxury for farmers who must make a living out of their livestock. They cynically and silently grunt at public outcry about squeezing three hens in a cage smaller than a piece of A4 paper and consumer jitters about eggs laid by stress-filled hens. It has been a long practice, so what’s with the sudden fuss? If consumers want free-range eggs, they must be ready to pay double or triple the price.

Save for top-shelf eggs, the egg market actually runs more or less with perfect competition. Millions of eggs laid by 7,000 hens a day are sold largely on competitive prices. “We are accused of indirect murder for pesticide-tainted eggs, but consumers are partly to blame because they have been chasing cheap products,” said one farmer in Yangpyeong County, Gyeonggi. “There is no such thing as cheap yet safe and good-quality food.”

If all farms were to become cage-free, then egg yields would decrease by a tenth from current levels. Korea would have to bring in cheap imports to make up the loss, but that’s not simple. Germany for instance is suffering from an egg scare because it, too, had pesticide-tainted eggs, shipped in from the Netherlands, because it could not meet demand with its homegrown supply due to its policies on stronger animal welfare.

Korea also has no space to breed free-range chickens. Solar energy is already hard to come by because the country does not have enough space to build solar panel farms on a massive scale. Even if there were extra land, few residents will want chicken farms in their neighborhood, which explains why livestock farms are so crowded.

Increasing the number of organic eggs is not the solution because it can disrupt prices and the market, just as the government’s move to phase out nuclear power has unnerved the industry. The country cannot afford to allow hens to stroll freely and lay eggs whenever they want. A certification for environmentally-friendly chicken farms was put in place in 2012, but it has made few inroads.

President Moon Jae-in has ordered the government to investigate and draw up a comprehensive report on the environment at livestock farms. What is worrisome is bureaucratic excess from officials who want to please the hugely popular president.

What will happen if a country consuming 13.5 billion eggs a year suddenly sees egg prices jump by double to 1,000 won (90 cents) apiece? The expensive eco-friendly and organic eggs will become affordable only to the rich, while the rest of the population will feel both unsafe and resentful about having to settle with eggs produced by chickens in cages. Food policy must not be as one-sided and financially uneconomical as social welfare policy.

Egg policies are a very tricky issue and likely to challenge the pharmacist-turned-politician who is the minister of food and drug safety. It is unfortunate for him as well as the general public to have such a neophyte at the helm of food safety.