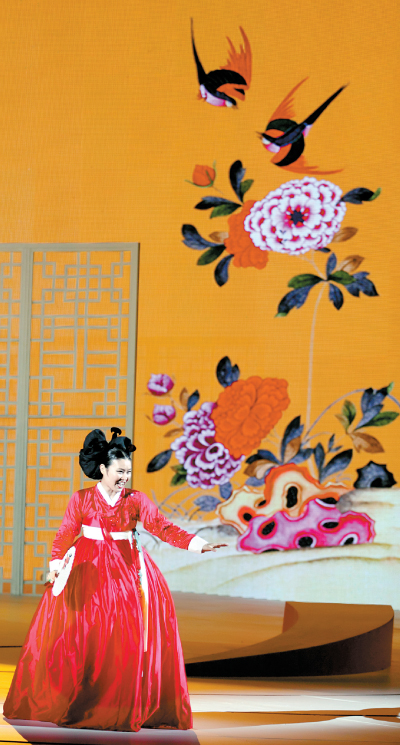 Outdoor opera performances are not something new in Korea. Since 1995, various opera companies have organized open air productions including Franz Lehar’s “Merry Widow” in 1995 at Olympic Park in eastern Seoul, Puccini’s “Turandot” in 2003 at World Cup Stadium in western Seoul, as well as “La Boheme” at Yonsei University’s amphitheater in western Seoul in 2012. Since most of them were met with negative feedback from both the audience and critics for having poor acoustics, stage design, uncomfortable seating and so on, the opera in the park that was staged over the weekend, Verdi’s “La Traviata” presented by the Korea National Opera, at the 88 Jandi Madang in Olympic Park in eastern Seoul, was attended by many wary of how the company was going to pull it off.

But the performance proved that Korea is now equipped with both the technical capability and aesthetic sense to bring opera outdoors for a wider audience to enjoy.

As part of a cultural project to welcome the 2018 PyeongChang Winter Olympic Games, the Korean National Opera, with support from the Ministry of Culture, Sports and Tourism, knocked on the door of renowned fashion designer Jung Ku-ho, asking him to direct an opera that is both aesthetically beautiful and able to be enjoyed by the public. The two-day production was given a nearly 2.5 billion won ($2.2 million) budget, and it seems to have paid off. Jung, who already has experience directing a number of productions with the National Dance Company, bravely took on directing an opera for the first time, giving a Korean twist to the famous “La Traviata.”

Jung’s style of direction seems to have hit the mark, especially for those who came to see the opera for the first time on Saturday. 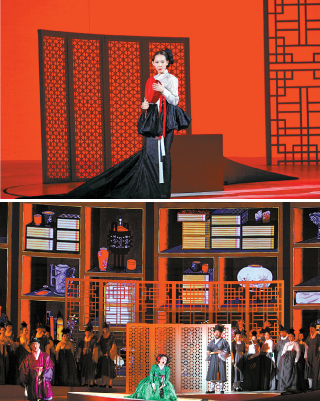 Top: Actor Chae Shi-ra appeared as a Storyteller in between scene changes to help audience members understand the story, which had been compressed into two hours without intermission. Above: The opera has been reinterpreted to be set in Joseon Dynasty’s most prosperous era instead of the original 18th century aristocratic France. [KOREA NATIONAL OPERA]

The large LED backdrop screen installed behind the circular stage was emitting bright red light on Saturday evening - the first day of the two-day performance - as about 7,000 people quickly moved around to find their seats either on plastic chairs or on mats at designated picnic zones.

The combination of a late summer evening with a cool breeze, Jung’s mise-en-scene and Verdi’s beautiful music under the moonlight made the experience quite extraordinary.

Especially for those familiar with the traditional production of “La Traviata,” it must have been quite awkward to see singers in hanbok, or traditional Korean dress, singing in Italian. But the awkwardness soon went away as the libretto is so similar to Joseon’s King Yeongjo (1694-1776) and King Jeongjo’s (1752-1800) period - an era that is often regarded by historians as “Joseon’s renaissance.”

The hanbok were definitely one of the most eye-catching aspects of the opera. Designed by famous hanbok designer Kim Young-jin of Tchai Kim, the four hanbok that Violetta wore, ranging from the bright red hanbok for party scenes to the pure white hanbok with hand-stitched red petals of a camellia flower which she wore at death, elicited audible exclamations from the audience. Thanks to the minimalist stage design, the beautiful silhouette of the hanbok stood out.

Since the opera has been compressed into two hours without an intermission, actor Chae Shi-ra appeared in between scenes as a Storyteller, helping to guide those unfamiliar with the story.

Soprano Lee Ha-young and tenor Kim Woo-kyung, who played Violetta and Alfredo pulled off their parts despite frequent noise disturbances.

“It’s my first time watching an opera and it was a great experience,” said Park Choong-hyun, 33, who came with his girlfriend. “I would come to outdoor opera performances every year if it’s as good as this one. It is definitely worth 30,000 won.”

Certainly there were some shortcomings such as the orchestra not being heard properly, or the frequent interruptions coming from helicopters overhead. Some also pointed out the awkward interpretations of some of the scenes from the original “La Traviata.” There would’ve been more disappointment if the tickets were priced at an opera’s usual cost - usually reaching up to 500,000 won for the most expensive ticket. But since the performance was aimed at a wider audience by offering a festive outdoor opera experience with tickets costing between 10,000 won and 30,000 won, it attracted families - although some children were seen asleep in their father’s arms.