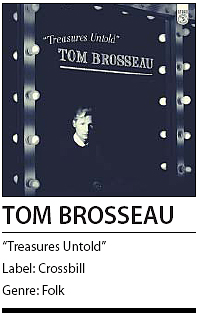 A character in a Tom Brosseau song doesn’t just cry - he wipes his eyes with his tie. Such details magnify the beauty in Brosseau’s precise performing style.

The wonderfully quirky North Dakota singer-songwriter goes live on “Treasures Untold,” and the show’s pace is unhurried from the start, with lengthy silence between songs contributing to the reflective mood. The recording opens not with the swell of a cheering crowd, but the sound of coins dribbling on a table in an otherwise quiet room.

Then comes his high tenor, an intimate and inviting instrument that makes a listener lean forward.

Original tunes are mixed with well-chosen covers by such heavyweights as Hank Williams, A.P. Carter and Jimmie Rodgers. Brosseau sings of misplaced trust, eternal damnation and love at first sight. The album was recorded in Cologne, Germany, of all places. “I had a mind for rambling, so far away from home,” Brosseau sings.