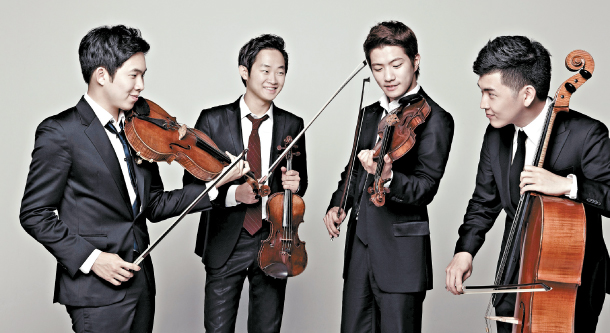 One of the most notable achievements for the Novus String Quartet, composed of four Korean musicians, are the awards the group has won at numerous international competitions. Most recently, the four musicians - Kim Jae-young and Kim Young-uk on violin, Lee Seung-won on viola and Moon Woong-whee on cello - won first prize at the Mozart String Quartet Competition in 2014, as well as the prestigious ARD International Chamber Music Competition in Munich in 2012 - becoming the first Korean chamber music ensemble to achieve the accomplishment.

However, Novus String Quartet, which celebrates its 10-year anniversary this year, says that participating in international competitions and coming back home with awards has been the only way to draw attention to a string quartet that “Koreans are utterly indifferent to.”

“What really made us exhausted over the past decade was probably the public indifference,” said Jae-young last week during a press conference for Novus String Quartet’s 10-year anniversary tour around Korea.

Its Seoul concert will be staged today at the Concert Hall of the Seoul Arts Center in southern Seoul at 8 p.m. The group will then perform at the Seongnam Arts Center in Gyeonggi on Sept. 1.

“Sadly, the only way to let people know that we exist and prove our musical [talent] was through competition,” Jae-young added.

The four musicians pointed out that Novus String Quartet will be the only classical music ensemble in the last 10 years without any kind of sponsorship in Korea. Music sponsorships in Korea tend to be focused on solo artists or orchestras.

“If you get to know the music, you ought to become a fan of a string quartet,” said Lee. “But until then, it may be perceived as just difficult and long music.”

Although Novus String Quartet is 10 years old, it is still a “baby quartet” as Jae-young puts it, in Europe, where the quartet has been more active in recent years.

“There are many quartets that have been performing together for more than 30 to 40 years in Europe so we believe we still have a long way to go,” said Young-uk.