After announcing a 42-man roster for an upcoming tournament open only to young players on Monday, Korean national baseball manager Sun Dong-yol rued the dearth of catchers and right-handed bats in their early 20s. 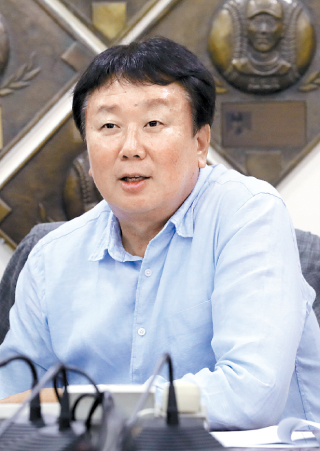 Sun Dong-yol, manager of the Korean national baseball team, speaks during a meeting at the KBO headquarters. [YONHAP]

Sun will lead Korea at the inaugural Asia Professional Baseball Championship, which will be played from Nov. 16 to 19 in Tokyo. It will feature pros from Korea, Japan and Chinese Taipei under the age of 24 - born on or after Jan. 1, 1993 - or those with less than three years of professional experience.

Sun said selecting his four catchers took the longest during his two-hour meeting with his coaches.

“We had six candidates and narrowed it down to four,” said Sun, the first full-time manager for the national team, which previously employed KBO club managers on a tournament-by-tournament basis. “We had to think long and hard about which of the catchers had the high ceilings, and who had the most potential to develop into everyday players.”

Sun said he had a relatively easier time picking his infielders and outfielders.

Among the position players are Nexen outfielder Lee Jung-hoo, the front runner for the KBO’s top rookie award this season, and his teammate Kim Ha-seong, a hard-hitting shortstop enjoying his second straight 20-homer season.

Kim is one of few right-handed batters on the team. Sun said he would like a little more balance in his lineup.

Sun could address these shortcomings by using his “wild cards.” Teams at the tournament are each allowed three players over the age or experience limit.

But the manager said he is considering not exercising that option, in order to give more youngsters a chance to play and develop for future competitions, such as the 2018 Asian Games, 2019 Premier 12 and 2020 Summer Olympics.

“I am still debating whether I should use the wild cards,” Sun said. “It’d be great to beat Japan, but personally, I think it’d be better to give young players an opportunity this time.”

In particular, Sun said only one among 42 players has competed at the Tokyo Dome, which has hosted some big tournaments in the past and will likely stage games during the 2019 Premier 12 and 2020 Tokyo Olympics.

Sun has until Oct. 10 to finalize his 25-man roster, though he could still make injury replacements until Oct. 31. He said he expects about five of the final 25 will get a chance to play regularly at the 2018 Asian Games.