Cambodia’s press is under attack

Cambodia’s press is under attack

Press freedom is under attack in Cambodia by the government, which is targeting The Cambodia Daily for closure. The Daily is an independent English-language newspaper started in 1993 in the aftermath of the genocide and civil war. 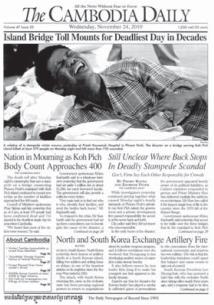 The motto The Daily lives by is simple, yet guides everything we do: All the News Without Fear or Favor. The Daily has always had two important missions: reporting hard news based on facts, and without bias, and training new generations of journalists to carry on the cause of independent journalism in Cambodia. Since its founding. The Daily has trained dozens of journalists who now play key roles in Cambodia and in the region.

The Cambodia Daily is more than a newspaper, it is an institution that has provided a window into Cambodia for the world and a way for Cambodians to understand what is happening in their country and beyond. Through our training of young reporters, we have provided countless opportunities for up-andcoming Cambodian journalists to make their marks.

Over the past 24 years, the Daily has gained a global reputation for its investigations and its fearless reporting, which has exposed corruption, fraud, forced evictions and oppression.

The Daily’s stories on the timber trade and the impact on deforestation have won awards, including an Excellence in Investigative Reporting from Society of Publishers in Asia, awarded this year for reporting on illegal logging. Today, the Daily is under siege.

This tax bill, which dates back 10 years, has no basis in reality. Even without performing an audit yet, the Cambodian government is imposing a 20 percent profit tax on revenue. They are both accusing us of being subsidized because we are running at a loss and at the same time demanding a 20 percent profit tax on all of our revenue. Unknown persons within the Ministry of Finance and Commerce General Department of Taxation (GDT) have been continuously leaking confidential tax information to the government-aligned website Fresh News before communications to The Daily are even postmarked.

It appears that the GDT may well have violated Article 94 of the Law on Taxation which states the GDT and its officials “must keep confidential the information pertaining to the taxpayer that they have received during their official performance of their duty and can provide the information only to the person that this article allows.” Instead our tax documents are being leaked to Fresh News.

The GDT must investigate which of its people are leaking documents about The Daily’s case, publicly release information about the investigation, and punish those found to have violated the law and/or department regulations.

The Cambodian government has carried out the entire tax examination process without adhering to professional standards, confidentiality or basic due process.

The continuous leaks of information about our case to pro-government media shows that this is more about driving us out of business than honestly trying to ascertain if any back taxes are owed.


* The author is the deputy publisher of the Cambodia Daily.