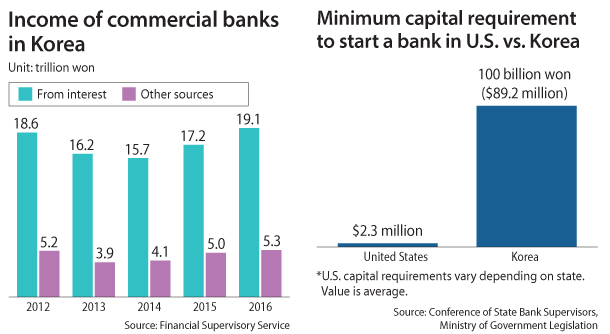 Last month, Korea’s financial authorities vowed to “modernize” the country’s financial industry by increasing competition in the market and diversifying its services.

In particular, the Moon Jae-in administration pointed to lowering the barrier to entry for new players as a key objective during the president’s five-year term.

A month after announcing the plan, the Financial Services Commission and Financial Supervisory Service formed a task force dedicated to the effort.

“A certain level of barrier to entry is necessary given the financial system must remain stable and consumers must be protected,” the Financial Services Commission said in a statement on Aug. 22, the day the task force was formed. “However, if new players cannot actively enter the market, existing financial companies will be guaranteed a stable profit and end up settling for the status quo instead of pushing for innovation.”

“We expect the introduction of new players to induce more competition amongst them,” said Park Jin-ae, a deputy director at the commission. “Competition will introduce new types of services to the sector and ultimate benefit consumers.”

The barrier to enter Korea’s financial industry is considered steep in comparison to other countries like the United States, where the average minimum capital to start a bank is $2.3 million. The state of Ohio requires the most capital, $10 million, but that’s still an eighth of what Korea requires for commercial banks, 100 billion won ($89 million), and for regional banks, it’s still a hefty 25 billion won.

The biggest testament to Korea’s high barrier to entry is the absence of new banks in the past two decades. The latest additions are the internet banks K bank and Kakao Bank, launched in April and July, respectively. The two banks, which operate exclusively on the internet and have no brick-and-mortar branches, were created through two consortia led by telecommunications provider KT and messaging app developer Kakao.

Before them, the Peace Bank of Korea was the last new bank, having obtained an authorization for business in the early 1990s. Peace Bank merged with Hanil Bank after the Asian financial crisis in 1997 to create Hanvit Bank, the predecessor of Woori Bank.

“The crux of Korea’s financial policy will be how to further develop the industry to make it globally competitive,” said Lim Hyung-seok, a senior research fellow at the Korea Institute of Finance. “The government will have to lower the barrier to entry to stimulate promotion and ultimately drive innovation and growth in the sector.”

Analysts believe raising the global competitiveness of Korean banks will also require portfolio diversification. Korea’s commercial banks have often come under fire by market observers and regulators for their lopsided portfolios that focus heavily on income from interest.

“Financial practices that promote short-term gains through expansion of debt are no longer appropriate,” Choi Jong-ku, chairman of the Financial Services Commission, said during this inaugural address last month. In another speech later that month, Choi compared the loan-heavy business model to “pawnshops” and said it can cause “financial instability.”

Last year, income from interest at commercial banks totaled 19.1 trillion won, nearly four times non-interest income, according to data from the Financial Supervisory Service. Sources of non-interest income include service fees, commissions, trust management fees and foreign exchange derivatives. Fees and commissions took up the largest portion of the pie at 3.1 trillion won. The ratio has remained more or less the same for the past five years.

Banks expect to continue reaping profit from interest as more people take out mortgages. The latest government data Tuesday showed that the average interest rate on mortgages reached 3.28 percent, up from 3.16 percent at the beginning of the year, making it the highest level in two years and six months.

While interest income takes up about 80 percent, sometimes even more, at Korea’s commercial banks, it is only about 60 percent of income at U.S. counterparts, according to data from the Korea Institute of Finance. The non-interest income includes money from fees, commissions and investment accounts.

A report from the Hana Institute of Finance warned that a business structure that is heavily reliant on interest will lower the ability of banks to hire and decrease the quality of other services like asset management.

The government hopes the introduction of new services and platforms like internet banks will herald a paradigm shift in the financial sector, but some analysts are skeptical.

“Right now, all internet banks do is lend more money,” said Lee Yoon-sok, a researcher at the Korea Institute of Finance. “They are offering basically the same products as others in the industry and following the same profit structure.”