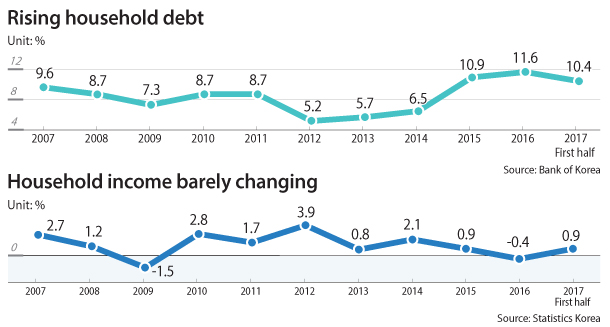 Financial Services Commission Chairman Choi Jong-ku on Monday revealed that the government’s household debt measures, which are scheduled to be unveiled in two weeks, will emphasize the stable management of debt rather than artificially reducing it.

Several government departments including the FSC and the Finance Ministry are currently working on a five-year blueprint, which has raised interest as to what the debt measures will include.

The full implementation of the total debt service ratio (DSR), which was one of the president’s campaign promises, and a new debt-to-income (DTI) regulation are speculated to be at the center of the household debt long-term management measure.

This new evaluation isn’t expected to immediately cut back household debt but will be targeted at changing the way financial institutions give loans and therefore improve risk management in the long term.

The DSR evaluation is tougher than the existing system in that it is more stringent when it comes to evaluating the person seeking the loan. Not only does it factor in the mortgage that the person is seeking but also other types of existing loans including unsecured loans, deficit accounts and even installment payments on cars. Under this evaluation people with multiple loans or limited income will see a significant reduction in how much they are eligible to borrow.

A new DTI will make it easier for younger people to borrow larger loans than those facing retirement or who do not have a steady source of income, as it will base the size of a loan on the prospect of the applicants income increasing and how promising their field of work is.

One of the measures said to be included is an expansion of the system where debt is written off on a mortgage for a property that’s value has depreciated. Currently the mortgage holder has to pay the full amount of the initial loan on the property, even when the value has fallen. But under the new measures it is likely that the depreciated amount will also be written off. This is likely to make financial companies more cautious when giving out loans.

Currently this system is only available to families whose annual income is less than 30 million won ($26,650) with a property that is 85 square meters (915 square feet) or smaller and valued at less than 500 million won.

Other measures are expected to include lowering the highest legal loan interest rates from 27.9 percent annually to 24 percent, which is expected to erase 1.1 trillion won in interest for 2.93 million people.

The government is also expected to expand the loans provided by state-owned financial institutions for lower income households hoping to buy their first apartment by increasing the total pot to 10 trillion won.

One of the most controversial measures is expected to be the write-off on long-standing debts.

President Moon’s de facto transition team in June announced a plan to cancel the debt of 1.2 million people who have been unable to repay a debt of less than 10 million won for more than 10 years.

The total cost of the scheme is estimated to amount to 21.7 trillion won.

If the government pushes forward with the write-off it is expected to be the largest of its kind, especially since past administrations have only cancelled part of the debt and readjusted repayment period.

Moon raised the need to ease the debt burden, especially on those that can’t afford to pay back their debt, during his campaign.

“[Some] debtors can’t participate in normal economic activities because they’re still faced with debts that they can’t afford to pay back while such debt is only increasing financial companies’ management costs,” said Moon.

The Moon administration has targeted household debt since taking office in May. Household debt has been growing at an alarming rate and is considered to be one of the biggest threats to economic growth, as it can limit spending and increase risk.

In fact, FSC Chairman Choi in July expressed concern over the affect that debt has had on the nation’s growth.

“Household debt is excessive when compared to the size of the nation’s GDP,” Choi told reporters during a press conference. “It is holding back consumer spending.”

He added that household debt has been holding back growth.

As of last year Korea’s household debt to GDP ratio was at 92.8 percent, which is higher than the 85 percent threshold that the Bank for International Settlement believes is when debt becomes a factor dragging down the economy. Compared to a decade ago, Korea’s household debt has more than doubled. In the last two years it has experienced double-digit growth.

As of the first half of this year, the balance on Korea’s household debt stands at 1,388 trillion won. When including additional loans borrowed in July and August, it is already believed to have reached 1,400 trillion won.

But during the same period Korea’s household income has barely moved as it has increased less than 1 percent.

Korea’s average monthly household income as of the end of the second quarter was 4.34 million won, which is a 0.9 percent increase compared to a year ago. A study by the International Monetary Fund projected that a 1 percent increase in the household debt to GDP ratio could result in consumer spending reducing by 0.06 percent.

People with multiple debts have generally borrowed money because of their livelihood rather than for investment purposes. Such loans become a risk when the economy falls into a depression or the person with multiple loans loses their job.

According to Statistics Korea, the debt repayment to income ratio is 63 percent. That means on average people spend 63 percent of their annual income on debt. The ratio exceeds 100 percent for 1.18 million people.

The government’s household debt measure is expected to set the goal for debt repayment at 40 percent of the debtor’s annual income.