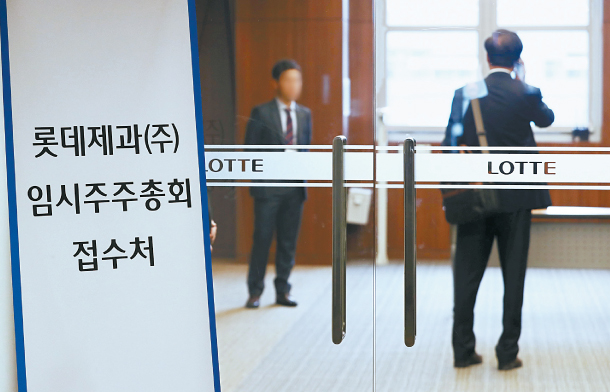 An employee waits for the extraordinary Lotte Confectionery shareholders’ meeting to convene at the company headquarters in Yeongdeungpo District, western Seoul on Tuesday. Shareholders of Lotte affiliates voted to establish a holding company on that day. [YONHAP]

Shareholders of Lotte’s four affiliates on Tuesday voted to agree to the retail giant’s plan to convert into a holding company, easing the conglomerate’s long-standing problem of its complicated cross-shareholding structure to simplify corporate governance and step up transparency.

Owners of shares at Lotte Shopping, Lotte Confectionery, Lotte Chilsung Beverage and Lotte Food issued a green light to split the four affiliates into an investment unit and an operating unit. The former will be merged to launch a holding company on Oct. 1, with Lotte Confectionery, the retailer’s original business, taking up the key pillar.

Lotte Corporation, the holding company, will mostly be engaged in operations to raise corporate value such as management assessment, support and brand license management and will be co-headed by Lotte Chairman Shin Dong-bin and Lotte President Hwang Gak-kyu.

“All of the four Lotte affiliates have obtained votes in favor of the [holding company plan] from nearly 90 percent of shareholders in attendance,” said Lotte in a statement after the extraordinary shareholders’ meeting.

Stock trading of the four companies will be suspended imminently and resumed on Oct. 30. The new holding company will also begin trading on the same day.

What Lotte plans to do with affiliates other than the four remains to be seen. Chairman Shin had planned to list Hotel Lotte, the current de facto holding company of Lotte Group, but failed to find an opportunity as Lotte was hit hard by the Chinese government’s measure to punish Korea over its decision to deploy the Terminal High Altitude Area Defense antimissile system earlier this year.

As soon as the trial and investigation of Chairman Shin currently under way over bribery charges involving impeached President Park Geun-hye wraps up, Lotte is expected to push ahead with an IPO for Hotel Lotte in order to merge it with Lotte Corporation, according to Lotte insiders.