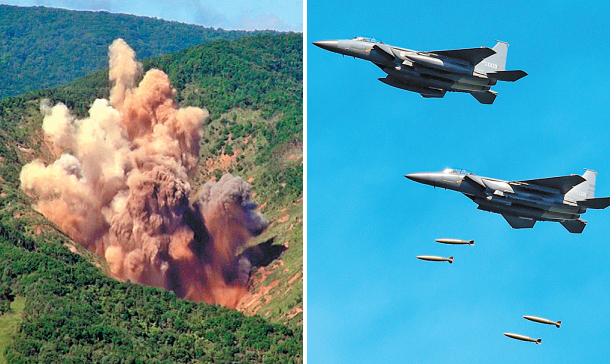 North Korea shot a ballistic missile over Japan Tuesday, raising tensions in the region to a new high and foiling expectations of dialogue after a joint South Korea-U.S. military exercise concludes.

The North fired a ballistic missile from Pyongyang, its capital, at around 5:57 a.m. toward the East Sea. It reached an altitude of 550 kilometers (341 miles) and flew 2,700 kilometers for 29 minutes before falling into waters to the east of Japan’s northern island of Hokkaido, according to the South Korean military.

It was only the third time since 1998 that a North Korean projectile breached Japan’s air space.

Alarmed by the missile’s trajectory, Japanese authorities told residents in Hokkaido and northern Honshu to take protective cover in case debris from the missile fell. Japan said it did not try to intercept the North Korean missile because it didn’t detect a threat to Japanese territory. 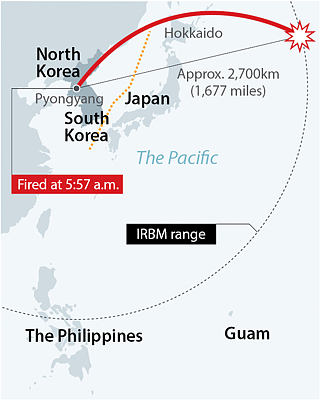 The first and third projectiles flew for about 250 kilometers before landing in the East Sea, while the second exploded almost immediately after liftoff.

The South Korean government considered the Saturday launches as a somewhat measured action by the North and expressed hope that there was still an opportunity for dialogue once the 10-day military drill is over on Thursday.

But with Tuesday’s launch, those hopes have been shattered, complicating President Moon Jae-in’s effort to solve the North Korean nuclear problem through dialogue and a freezing of its nuclear activity. On Monday, Moon told a visiting delegation of five U.S. House of Representative members that the nuclear gridlock “should be resolved in dialogue” combined with pressure and sanctions.

“With its missile launch today, the North made clear its message that it is not interested in taking part in talks aimed at freezing or dismantling its nuclear capability,” said Koh Yoo-hwan, a professor of North Korean studies at Dongguk University in Seoul.

“It sees itself just an inch away from completing an intercontinental ballistic missile (ICBM) program,” the professor continued. “The North will try to complete the ICBM development and use it as leverage in future talks.”

The two other times that North Korean projectiles flew over Japan were in 1998 and 2009. They differed from Tuesday’s launch because the North insisted that the projectiles were rockets for satellite launches. Experts viewed the North’s claim as an excuse to cover its pursuit of missile technology. On Tuesday, the North gave no excuse for the launch.

In response to the North’s latest provocation, the presidential office convened a National Security Council (NSC) session at 7 a.m. presided over by NSC chief Chung Eui-yong. President Moon Jae-in did not attend.

The president ordered the military to display an “overwhelming military retaliatory capability.” Under the order, the Air Force deployed four F-15K fighter jets and dropped eight MK84 bombs on a shooting range near the inter-Korean border in Taebaek, Gangwon, in a show of force.

Japanese Prime Minister Shinzo Abe and U.S. President Donald Trump talked over the phone to discuss how to respond to Pyongyang’s latest military move. The two agreed that it was not the right time for dialogue with the North and they should instead increase pressure as punishment, according to Kyodo News Agency.

Tuesday’s launch was the 13th missile firing this year and the ninth since President Moon, who favors more engagement with Pyongyang, took office on May 10. It differs from previous tests as the missile was placed at the normal firing angle of between 30 to 34 degrees, showing the world how far it was capable of flying. In some past launches, the North placed missiles at steeper angle to shorten their ranges.

For instance, it test-fired a Hwasong-12 intermediate range ballistic missile (IRBM) on May 14 that traveled as high as 2,110 kilometers and covered 780 kilometers in distance.

The missile fired Tuesday is also believed to have been a Hwasong-12 missile. It traveled four times longer than the May 14 launch, 2,700 kilometers, and reached an altitude of only 550 kilometers.

It is also the Hwasong-12 that North Korea threatened to fire into waters 30-40 kilometers off the U.S. territory of Guam, home to U.S. military bases. IRBM generally are deemed to have ranges between 3,000-5,500 kilometers.

Americans “will have to open their eyes and ears because they will never know when and how a Hwasong-12 missile will attack them,” read the Korean subtitles over footage of a past missile test posted on the YouTube account of Uriminzokkiri, a website operated by North Korea’s equivalent to the South’s Unification Ministry, on Aug. 19.

While the 2,700 kilometers covered by the missile Tuesday fell short of the distance to Guam by around 600 kilometers, it is believed that with more fuel a Hwasong-12 missile could reach Guam.

“Following its verbal rhetoric about so-called ‘enveloping fire around Guam,’ its ballistic missile launch [Tuesday] that matched the distance [to reach Guam] is a serious threat to our military and the Korea-U.S. alliance,” the South Korean military said Tuesday.

The North fired a missile over Japan because sending it toward Guam would be seen as a “preemptive strike” against the U.S., Koh of Dongguk University told the Korea JoongAng Daily.

“Today’s launch bears significance to the North Koreans as it demonstrated their capability to hit the U.S. territory without actually firing a missile toward it.”

But it remains to be seen whether the Tuesday launch demonstrated whether Pyongyang has mastered atmospheric re-entry technology, a key to weaponizing its IRBMs and intercontinental ballistic missiles (ICBM). Both IRBMs and ICBMs require a re-entry vehicle to withstand the intense heat when it arcs through space and reenters the atmosphere.