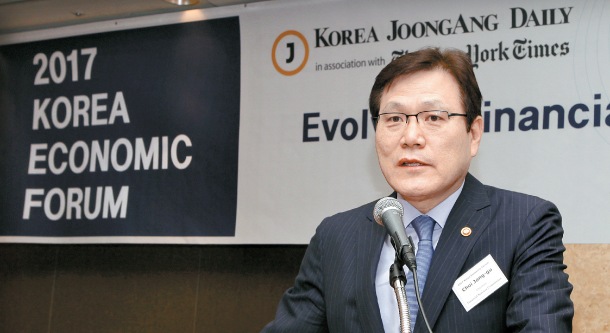 Financial Services Commission Chairman Choi Jong-ku said the government is ready to approve additional online banks if there are companies and investors willing to start them.

Choi mentioned the popularity of Kakao Bank, which led to potential customers having trouble setting up accounts. “The overloads and access denials [on online banking websites] were problems that were created because everyone tried to subscribe at once,” Choi said. “In a short period of time, subscribers to Kakao Bank have reached 3 million while deposits amount to 2 trillion won ($1.78 billion) and loans at 1.8 trillion won, which exceeded expectations.”

He said there was clearly a huge demand for an alternative to existing financial institutions. The government will be lifting regulations on online banks so the industry can grow.

The question is whether financial companies and investors are willing to create new online banks, the FSC chairman said.

“Has the government rushed its approvals of internet banks?” Choi asked rhetorically. “I don’t think so. When compared to Japan or the U.S., we’re very late. And some ask if two [online banks] should be enough?”

The government is already at work lowering barriers to new entrants to the industry. This includes boldly abolishing regulations that are considered inimical to the expansion of the financial technology industry, or fintech.

“Korea’s state-run banks including the Industrial Bank of Korea will be leading other [private] financial companies in supporting the fourth industrial revolution technologies,” Choi said.

He said the wider application of fintech will help create jobs that have been lost from physical branches being shut down by the local financial industry.

“Past strategies involving large number of branches have reached their limits,” Choi said. “We expect that when the fintech industry rises, it will fill the void and create new opportunities while energizing the economy.”

When asked by British ambassador to Korea Charles Hay about opening up the Korean services market including financial markets, Choi said the government will continue to lift barriers so that more foreign financial companies can enter the Korean market.

He also said while the current government is more liberal than its predecessors, ideology isn’t important in government policy decisions.

“Whether it’s conservative or liberal, it is important to come up with policies that focus on what is needed in the current situation,” Choi said. “[The current administration’s focus is] other areas - like, are employees making the appropriate wages considering the profits and growth of companies?” Choi said.

The chairman also weighed in on North Korean provocations and their impact on the South Korean financial markets.

“It’s difficult to answer what progress can be made in relations with North Korea [because of its unpredictability], but the situation will not reach an extreme as not only South Korea but also neighboring countries are doing their best trying to prevent such a situation.”

“It is now a constant rather than a variable that influences the Korean economy,” Choi said. “Although temporarily the market moves every time a missile is launched, it quickly recovers. The influence on the real economy is [also] limited.”

He said the current market situation is, in fact, more stable than during the global financial meltdown of 2008, when he served as head of the international finance bureau at the Finance Ministry.

“The level of foreign reserves and corporate debt are manageable,” Choi said.

The forum was held the day after North Korea launched a missile that flew over Japan.