Choi Jong-ku, chairman of the Financial Services Commission, explains the government’s economic policies to heads of financial companies and foreign dignitaries at the Lotte Hotel Seoul on Wednesday. [PARK SANG-MOON]

The goal of Moon’s administration, Choi explained, is to ensure a broad section of the public can enjoy a decent income and living standard. Within the financial sector, he said, it means ending dependence on loans, bonds and other debt instruments for profit.

“We will not seek short-lived economic booms with leveraged finance,” the chairman said, “but reinforce our productive capacity throughout the economy.”

Choi said the Financial Services Commission will work to encourage financial institutions to put capital into what it considers more productive segments of the economy.

“For one, our banking institutions appear to enjoy easy household lending and continue to rely heavily on borrowers’ collateral or guarantees,” he said. “We intend to work to make more funds from policy-oriented financial institutions flow into innovative start-up companies.”

Another important pillar of people-centered growth, Choi said, is supporting disadvantaged and underserved populations. “We are thinking about what can happen when financially vulnerable borrowers receive relief from high interest burdens, or borrowers long suffering from loan defaults get a second chance with a clean slate,” he said. “I think we can expect rising disposable income for many people and a more vibrant economy.”

The chairman’s remarks are consistent with Moon’s push for a large-scale debt relief program that includes wiping the debt of some 400,000 people. Beneficiaries include borrowers who restructured their debt under the government’s National Happiness Fund but are still struggling to pay it off. 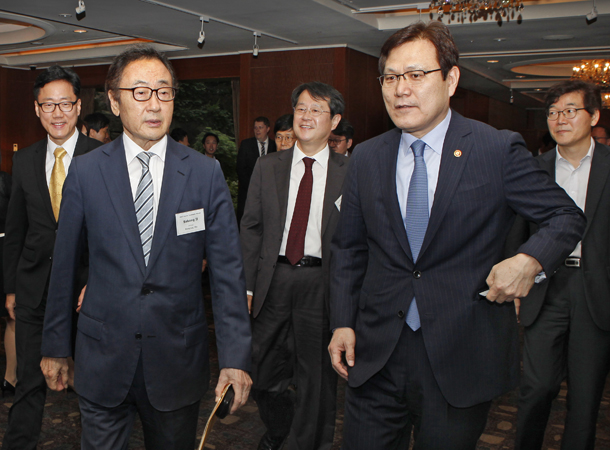 SaKong Il, left, chairman of the Institute for Global Economics and adviser to the JoongAng Ilbo, exchanges words with Choi Jong-ku, chairman of the Financial Services Commission, at the Korea Economic Forum. [PARK SANG-MOON]

The program will forgive debts that have been overdue for 10 years if the amount is less than 10 million won ($8,930). The Financial Services Commission is also considering debt relief for borrowers of loans from public financial institutions.

As for the agency’s role in regulatory oversight, the chairman vowed to lower the barrier to entry for aspiring companies in the banking industry. “For our part, the financial authority will work to reduce entry barriers and provide as much leeway as possible to encourage vibrant and dynamic growth of financial markets,” he said.

But Choi added the caveat that it does not mean the Financial Services Commission will go easy on companies. “At the same time,” he said, “if financial institutions cause consumers serious harm or fail to comply with rules and regulations, then we will aggressively demand accountability and responsibility from them.”

Choi’s keynote speech at the Korea Economic Forum followed welcoming remarks from SaKong Il, an adviser to the JoongAng Ilbo and chairman of the Institute for Global Economics. He formerly served as finance minister under Chun Doo Hwan from 1987 to 1988. Choi has called SaKong one of his role models.

He raised the need for serious policy discussion in a time of economic uncertainty at home and abroad.

“The U.S. Fed continues to tighten and the ECB, to start to curtail its stimulus programs, and global financial markets will definitely be impacted by, for example, previously experienced so-called taper tantrum,” he said, referring to a rise in U.S. Treasury yields in 2013 that led the Federal Reserve to gradually reduce the amount of money it was circulating.