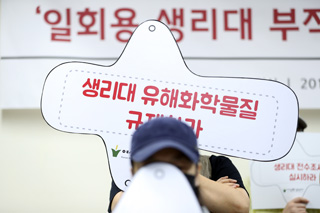 When I first learned about the safety issue of the Lilian sanitary pads, I thought, “Could such serious side effects happen after using the pads for several days a month?” However, friends who use the pads personally experienced the side effects. Users who had irregular periods did not know the cause and worried that they may be experiencing menopause.

Chemophobia is spreading among consumers. Since people don’t trust eggs and stopped buying them, the egg price plummeted. Sanitary pads sales in stores decreased, and more and more people purchase foreign products directly from overseas stores. Consumers are not overreacting after the tremendous damage and social cost over the humidifier disinfectant case.

The harmful effect on health from sanitary pads has long been an issue in other countries. In 2014, Women’s Voices for the Earth (WVE), an American environmental group, raised the issue. It studied four models of Always by P&G, a best-selling product line in the United States, and toxic substances such as styrene and chloroform were found. The WVE staged a protest in the U.S. Congress in May. However, there hasn’t been any action on sanitary pads in Korea before the Lilian controversy.

Lately, safety issues are raised by foreign media and consumer groups and are checked in Korea belatedly. Korean consumers self-deridingly say that it is fortunate to learn about the issues after controversies arise in other countries.

We can only envy how Public Health England (PHE) responds. The agency preemptively researched and found that the processed pork products from the Netherlands and Germany caused the outbreak of Hepatitis E before it became an issue. PHE paid attention to the fact that Hepatitis E patients suddenly increased in the United Kingdom and conducted an epidemiologic investigation on 60 patients with no foreign travel history. The virus was a type not found in pigs in the United Kingdom. After tracing the epidemic, PHE concluded that pork and ham from the Netherlands and Germany sold at a large supermarket chain caused the outbreak.

The response so far has revealed that it was too much to expect such a thorough response from the Korean safety authorities. It is the role of the consumers to at least thoroughly confirm issues that have been raised in other countries, if the authorities lack the capacity and manpower for preemptive investigation.

Consumers are now researching controversies in other countries. It was consumers who shared information in an online parenting community that found toxic substances in P&G diapers in France. The consumers’ action will become more powerful and important now.