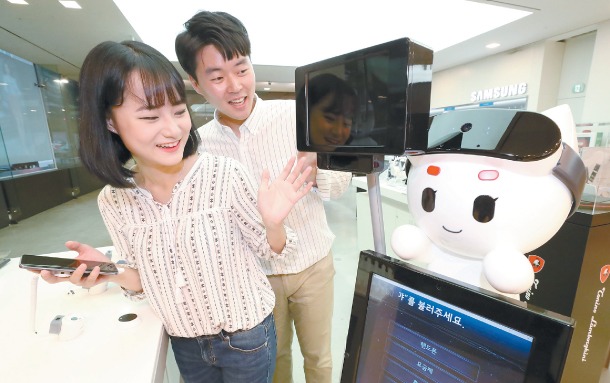 Models pose with KT’s Geniebot, an artificially intelligent robot that has been designed to interact with customers, at the KT Avenue branch in southern Seoul on Wednesday. [KT]

Visitors to mobile carrier KT’s store in Gangnam station, southern Seoul will be greeted by an artificially-intelligent robot that can discuss products, take selfies and even play games with them, starting today.

The second-largest telecom operator said on Wednesday it has built an AI robot called Geniebot and dispatched it to the KT Avenue branch. Geniebot looks similar to Pepper, a humanoid robot from SoftBank Robotics, except that the display embedded in the machine is bigger and the features have been modeled after KT’s Kori character.

The robot’s system is powered by voice-recognition AI platform Giga Genie, which KT unveiled at the end of January as it launched an AI speaker similar to Amazon’s Alexa. KT has added a database to Giga Genie of possible conversations with customers at commercial venues.

Geniebot will be standing at the entrance of the phone store, greeting customers after it recognizes a human face. It is able to deal with customers’ queries on available smartphones, monthly subscription plans and wireless internet services by showing the answers on a screen built into its chest. The robot can also call for human assistants if necessary.

“KT has learned that younger consumers in their teens to 20s and 30s prefer stores that allow them to experience the services offered on their own before making a purchase,” said a KT spokesman.

Korea’s smallest mobile carrier LG U+, meanwhile, is focusing on even younger users, announcing today that it is adding YouTube Kids to its internet protocol television service.

YouTube Kids, a video streaming app from YouTube that only offers content suitable for kids, has a range of video content from entertainment and music to education and experiments. It is the first case in the world of YouTube Kids being offered through an IPTV service.