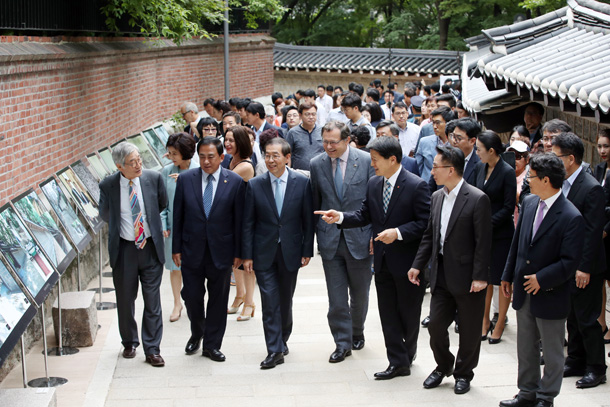 Seoul Mayor Park Won-soon, third from left, and British Ambassador to Korea Charles Hay, fourth from left, stroll together on a 100-meter (328-foot) stretch of Stonewall Road, or Doldam-gil, by Deoksu Palace in central Seoul on Wednesday, when the section of the road was reopened to the public after nearly 60 years of ownership by the British Embassy. [YONHAP]

A stretch of central Seoul’s panoramic Stonewall Road, or Doldam-gil, that was closed off to public under the request from the British Embassy for nearly 60 years was returned to the Seoul Metropolitan Government on Wednesday, ready and open for all.

“I am happy to announce the agreement between the Seoul Metropolitan Government, the British Embassy and the Cultural Heritage Administration, which has allowed us to return to the people part of the road,” said Seoul Mayor Park Won-soon at the ceremony celebrating its opening. “When I became mayor, I wanted to return this part of the road to the public. So I approached the British Embassy in 2014 and we have been working hard since then. Here is our reward.”

A 1.1 kilometer (0.68 mile) road surrounds Deoksu Palace, and 170 meters (186 yards) of it connects the front and back gates of the Embassy of the United Kingdom. Of this, 70 meters have been off limits since the British government bought the land in 1883; and 100 meters of it, owned by the Seoul Metropolitan Government, was off limits since 1959 under the embassy’s request.

On Wednesday, the 100 meter stretch was opened to the public. The other 70 meters remain off limits due to security needs, a city government official said.

“As British ambassador, I’m grateful to my 19th-century predecessors for securing the site where the embassy lies,” said British Ambassador Charles Hay. “It had, and still has, the benefits of being close to local and central government, and to the royal palaces. It was also a bargain - we paid the equivalent of just 300,000 won [$267] for the land and buildings.”

He continued, “I am less grateful to my predecessors in the 1960s who, at some point, seem to have decided not to renew the lease that they had taken out on this stretch of road. We don’t know why they did this, or what the views of the Seoul government of the time were, but as memories faded, everyone assumed that it was part of the embassy. We now know that we did not own it, after all. And so I am pleased to be able to correct the anomaly and officially hand back the land to Seoul Metropolitan Government.”

The 100-meter stretch of road, which now begins from the relocated back gate of the British Embassy and can be accessed from within the palace grounds, was once frequented by kings Gojong (1852-1919) and Sunjong (1847-1926) for ritual ceremonies, the city government said.

“We hope to connect the road further from here, leading all the way to the Jeongdong Park,” said Choi Chang-sik, head of the Jung District Office. The city government intends to call it King Gojong Road.

“I’ve lived here for 47 years now, sent my son to school in this neighborhood and all,” said Baek Soon-ock, an 80-year-old resident of a house located near the end of the newly opened stretch of the road. “I had to go around the whole palace walls just to get to the Seoul City Hall, but now I can cross through the palace to get to places faster. Great news for old folks living around here, I say.”