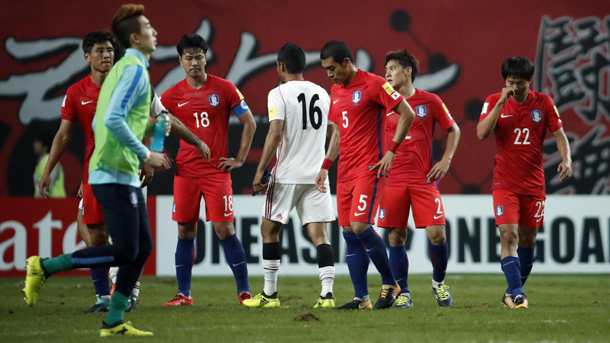 The Korean national football team walk off the field after a scoreless draw against Iran in the final World Cup qualification match at Seoul Word Cup Stadium on Thursday. [YONHAP]

Korea inched closer to a World Cup berth after a scoreless draw with Iran on Thursday.

Korea failed to get past 10-man Iran in their World Cup qualifier at Seoul World Cup Stadium, but remained in position to secure their ninth consecutive trip to football's showpiece event with one match remaining in the final Asian qualifying round.

Despite the draw, Korea is still in second place in Group A, thanks to Uzbekistan's loss to China also on Thursday.

Korea now has 14 points, two clear of Uzbekistan before their crucial showdown in Tashkent next Tuesday. Korea only needs to avoid a loss next week to secure their ninth consecutive World Cup ticket.

In Asia, only the top two teams from Groups A and B will advance directly to the 2018 FIFA World Cup in Russia. Two third-place nations will drop to the playoffs for a final chance to qualify.

Iran had already booked their spot before Thursday's match, and improved to 21 points in Seoul.

Korea hasn't beaten Iran since January 2011. Their four previous meetings had all ended in 1-0 victories for Iran.'
Korea had the match's first opportunity in the 17th, when Son Heung-min's free kick from just outside the box deflected off an Iranian player and out of play.

Jang Hyun-soo nearly headed home Korea's first goal in the 19th minute following a long-distance free kick, and his missed attempt turned out to be Korea's last scoring opportunity in the tightly-contested first half.

Iran had one shot on net in the opening half, as forward Reza Ghoochannejhad, with three Korean defenders on him, still fired a hard shot right at goalkeeper Kim Seung-gyu in the 37th minute.

The pendulum appeared to swing in Korea's favor in the 52nd when Iran midfielder Saeid Ezatolahi was sent off for a hard foul on Kim Min-jae. Following an aerial battle for a loose ball, Ezatolahi, who was hit in the face, stomped on Kim's head while the Korean was on the ground.

Korea failed to exploit their man advantage or put much pressure on Iran.

Korea won another free kick close to the box in the 77th, but midfielder Kwon Chang-hoon airmailed the ensuing opportunity.

The hosts' efforts down the stretch all proved futile, as Iran remained undefeated in the current qualifying round.