Koreans 65 and up now surpass those under 15

Koreans 65 and up now surpass those under 15 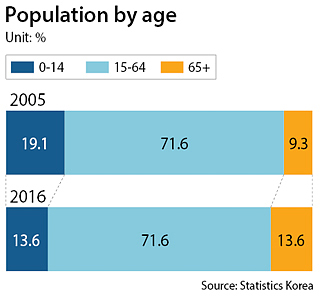 The number of Koreans aged 65 and up has surpassed the population of Koreans under 15 for the first time, suggesting the country is quickly on its way to becoming a super-aged society where one in five is over 64.

One province, South Jeolla, has already earned the status of super-aged, according to 2016 census results released Thursday by Statistics Korea. The largely rural province’s senior citizens made up 21.4 percent of the population last year.

Statistics Korea did not expect this milestone to come so quickly. Last year, the agency estimated the older population would surpass the younger population in 2018.

“The number of newborns was smaller than expected, so it happened faster,” a Statistics Korea official said.

The government’s aged-to-child ratio, which indicates the number of older people per 100 younger people, was 100.1 last year. A ratio above 100 suggests the size of the older population has surpassed the younger. In the previous year, the ratio was 95.1.

Nine out of 17 provinces and cities in Korea had an aged-to-child ratio over 100 last year.

After South Jeolla, North Jeolla had the highest percentage of people over 64, at 18.4 percent, followed by North Gyeongsang with 18.2 percent.

Of the entire population, the number of those with Korean citizenship was 49.86 million, while the number of foreign residents living in the country for at least three months was 1.41 million, accounting for 2.8 percent.

Gyeonggi had the highest number of foreign residents with 470,000, accounting for 33.4 percent of the total, followed by Seoul’s 23.7 percent.

The population of Seoul declined by 1 percent, and that of Busan and Daegu each fell by 0.2 percent.

Sejong’s population, on the other hand, increased by 18.8 percent, the highest jump, followed by Jeju’s 2.9 percent and Gyeonggi’s 1.5 percent.