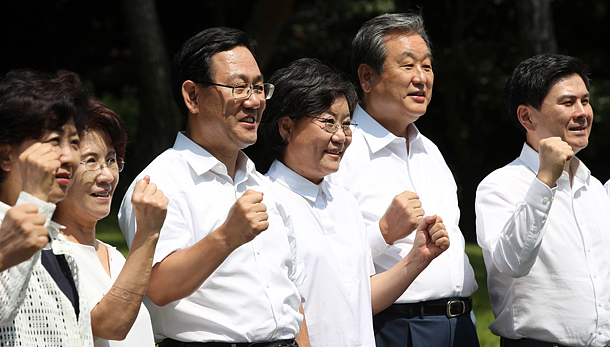 Lee Hye-hoon, third from right, chairwoman of the Bareun Party, attends a workshop for the party’s lawmakers at a training center in Paju, Gyeonggi, on Thursday. Lee was accused on Thursday of accepting bribes from a businessman. [YONHAP]

The chairwoman of the Bareun Party was accused on Thursday of accepting bribes, amid calls for the party to merge with the largest opposition Liberty Korea Party.

“She told me she would help my business if she gets elected,” a businessman surnamed Ock said in an interview with broadcaster YTN, “so I gave her 5 million won [$4,440] in cash on March 8 [2016] at a hotel.”

Ock said in return for receiving business favors from Lee Hye-hoon, he gave her cash money and luxury items worth 60 million won from October 2015 until March. He also claimed Lee had arranged meetings with business leaders for him.

Lee immediately denied she had arranged such meetings, though she acknowledged that she had received financial help from him, but said she had paid all of it back about “three to four months ago.”

During a hastily arranged press briefing in Paju, Gyeonggi, where the Bareun Party was hosting a workshop session, she said, “He contacted me constantly and told me to borrow money from him when needed. I paid the money back.”

She said she came to know him when he approached her, saying he wanted to help her campaign ahead of the general election in April of last year. Lee, a former economist, said he was a part-time campaign volunteer who monitored her interviews and helped her with dress and makeup.

She added that she had a fallout with Ock when he told her his business was struggling and asked her to lend him money, but she refused.

“I kept ignoring his demands for money even after I paid back all the money I owed him. Then he told the press distorted information,” said the party chief, adding that she was considering bringing the case to court.

While Lee strongly denies the allegation, it comes at a rather delicate time for her and the party, since there have been calls from within the party for Bareun lawmakers to return to the Liberty Korea Party, from which they defected in January.

The Bareun Party comprises 20 former LKP members who left the party over the LKP’s stance on then-President Park Geun-hye in the months leading up to her removal from office on March 10. But Lee is strongly against returning to the LKP, now led by former presidential nominee Hong Joon-pyo.