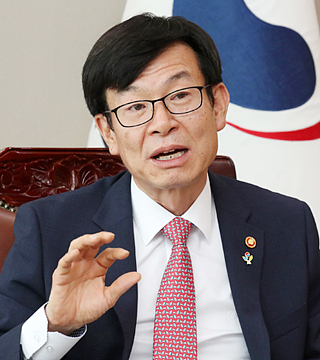 The chairman of Korea’s fair trade regulator warned the country’s top conglomerates on Friday that if they did not improve their corporate governance by the end of the year, the government would do it for them.

“If they don’t show positive change or willingness to reform by December, [the Fair Trade Commission] has no choice but to step out to impose ‘structural prescriptions’ like revising laws [related to corporate governance],” Kim Sang-jo, chairman of the commission, told the Hankook Ilbo, a local daily, in an interview. “Even though individual business groups have different situations, the initial deadline for their corporate reform will be December, when the National Assembly is scheduled to wrap up review of related bills.”

The chairman, whose pointed criticism of Korean conglomerates known as chaebol has earned him the nickname “chaebol sniper,” said his agency had conducted preliminary research into abuse of power in the companies’ top ranks, including the families that own the country’s big conglomerates and their controlling stakes in affiliates. The review, he said, has uncovered a double-digit number of companies with violations, and they will be subject to further investigation.

Kim has been particularly outspoken about Samsung’s need to change its corporate structure to reduce cross-shareholding and improve transparency, but he expects the sentencing of Samsung heir Lee Jae-yong to five years in prison for bribery to have little impact on the company’s performance.

“Even though strategic business decisions when it comes to inking major mergers and acquisitions or adopting a holding company structure may be pushed back a year or so - at a cost to the group - it won’t really rattle Samsung Electronics,” he said. “Samsung Electronics’ management system has reached a global level.”

But he did express concern about other affiliates under the Samsung Group. Should they face any problems, there will be no centralized decision-making body to take care of the issue, he said, because Samsung had disbanded its Future Strategy Office, which covered decision-making for all affiliates, in February as an independent counsel was wrapping up its investigation into collusion between Samsung and the government.

The office’s two leaders, Vice Chairman Choi Ji-sung and President Jang Choong-ki, stepped down at the time, and last week, they were sentenced to prison along with Lee for bribery.

“Hyundai Motor faces big risk because it is doing nothing about improving its governance or future business direction,” he said. “A group of vassals look up to the chairman at the top, no one dares to make any decisions and time just passes by.”

Hyundai Motor is facing a series of major blows to their business, losing ground in the domestic market as well as the United States and China, two of the world’s biggest auto markets.

Last week, it had to temporarily suspend operations at four factories in Beijing because of a parts shortage stemming from a payment dispute with a local supplier.

“I have one message to Hyundai Motor,” Kim said. “If you waste time, you will face the same risk as Samsung did. Don’t bring misfortune upon yourself.”