Nominee for Constitutional Court drops out over stock riches

Nominee for Constitutional Court drops out over stock riches 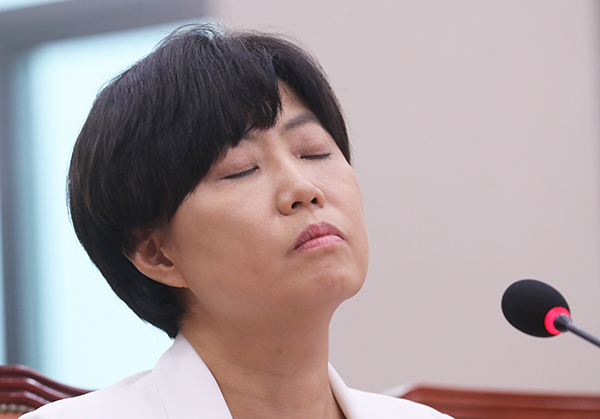 President Moon Jae-in’s Constitutional Court nominee, Lee You-jung, gave up her nomination on Friday over controversy over how she made so much money on the stock market.

“I do not want my problem to become a burden to the president and the Constitutional Court,” Lee, a lawyer and professor at Ewha Womans University, said in a press release.

Lee had earned the nickname of “You-jung Buffett” for her allegedly suspicious success in the stock market,
“It is untrue that I had unlawful deals using insider information,” Lee said. “But I cannot deny that I failed to meet the public expectation of high ethical standards from a candidate for a public office.”

Moon nominated the 49-year-old former public prosecutor on Aug. 8 as a new justice of the Constitutional Court. If her appointment was confirmed, she was to become the youngest member of the court’s nine-member panel.

Since her nomination was announced, her lucrative stock investments became an issue during a confirmation hearing. According to a report she submitted to the National Assembly, she earned 1.22 billion won ($1.09 million) in profits through stock investments over the past 18 months.

Of the profits, more than 500 million won came from her trading of Natural Endotech, a biotechnology company that her law firm was representing. She works for One Law Partners, and Natural Endotech has been its client for years.

Lee purchased 10,000 shares of the biotechnology firm in May 2013 when it was unlisted. It was listed on the Kosdaq in October 2013, and Lee sold her shares in January and August 2014, earning more than 500 million won in profit.

In April 2015, the Korea Consumer Agency announced that the company used illegal herbal ingredients in its products. Shares of Natural Endotech fell from 91,000 won to 9,270 won per share after the announcement and following investigation.

Shortly before the crash, Natural Endotech executives were investigated by the financial authorities for selling their shares using insider information.

Lee has consistently denied that she used inside information for her investment.

The Financial Supervisory Service said Wednesday that it will launch an investigation of Lee’s trading if a petition is received. Because opposition parties have already said they will ask for such an investigation, a probe is likely.

The Blue House said Thursday that it respects Lee’s decision. “Giving up the nomination doesn’t mean that she accepted the accusations,” a senior Blue House official said. He also said Lee did not talk to the Blue House in advance before making the decision and no illegality in her stock investment was discovered during the vetting process.

Lee’s resignation is also linked to the opposition parties’ delay in confirming Constitutional Court Chief Justice-designate Kim Yi-su. Speculation was high that the National Assembly would vote on a resolution to confirm Kim, currently the acting chief justice of the court, on Wednesday, but opposition parties refused to hold the vote.

Since the Constitutional Court’s chief justice, Park Han-chul, retired from the post on Jan. 31, 2017, the court has been operating with one or two vacancies.

Justice Lee Jung-mi took over the role as the acting chief and completed the impeachment trial of President Park Geun-hye. After Lee’s term ended in March, the court has been operating with a seven-member panel. Due to the two vacancies, the court has refrained from making rulings on crucial issues. The confirmation of Kim’s nomination to head the court has been pending for 105 days.

“Vetting is important, but the National Assembly appeared to be ignoring the importance of normalizing the court,” an official of the Constitutional Court said. “Linking the appointments and politicizing them are a serious problem.”

The ruling Democratic Party demanded the opposition parties cooperate with Moon’s attempt to fill the vacancies on the bench, urging the conservatives to vote on Kim’s confirmation resolution.

The Liberty Korea Party, however, said the Blue House must take responsible for its failed vetting. “Who recommended Lee and why the vetting process failed must be made public and those responsible must be held accountable,” said Rep. Choung Tae-ok, spokesman of the main opposition party. “The scandal of Lee cannot end with her resignation. There should be a criminal investigation.”

The People’s Party went further. It said Park Seong-jin, Moon’s nominee to head the new ministry of small and medium companies and startups, must give up his nomination.

Park, a mechanical engineering professor from Pohang University of Science and Technology (Postech), was named to the post last week. His conservative historical views have been criticized, but the Blue House said it sees no critical problem with his qualifications. The National Assembly postponed his confirmation hearing from Sept. 7 to 11.