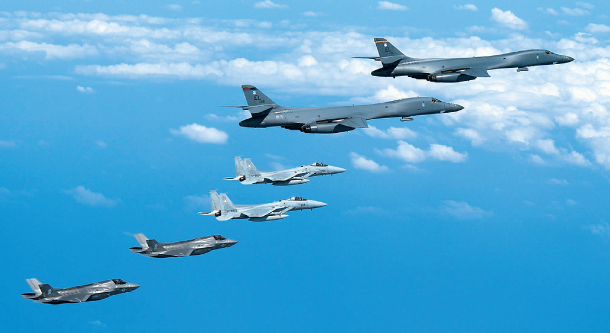 Two B-1B Lancer bombers from Guam and four F-35B stealth fighter jets from U.S. bases in Japan fly over Japan’s air space on Thursday after the United States deployed its strategic assets to South Korea for a live firing exercise near the inter-Korean border, in response to the North’s intermediate-range ballistic missile launch Tuesday. [YONHAP]

The Blue House dismissed the possibility of bringing U.S. tactical nuclear weapons to South Korea after reports got out that Korean Defense Minister Song Young-moo mentioned the idea in a meeting with his counterparts in Washington.

“We have not discussed anything related to the tactical nuclear weapons in this administration,” said a senior government official of the Blue House. “The Korean government respects the international efforts on nonproliferation and its policies have been and will be in line with these efforts.

“What Minister Song Young-moo talked about in the meeting in Washington was part of his explanation of domestic issues in Korea,” the official added, “and we have also confirmed with Song that he wasn’t requesting the U.S. government to deploy nuclear weapons here.”

In a meeting with U.S. Defense Secretary James Mattis on Wednesday, Song mentioned that conservative opposition parties were demanding the redeployment of nuclear weapons to resolve the security crisis.

“[Adm. Harris] reaffirmed the ironclad U.S. commitment to the Mutual Defense Treaty, which states that a North Korean attack on one is an attack on both nations,” said Pacom’s spokeswoman Marine Capt. Cassandra Gesecki on its website. “He emphasized U.S. preparedness to fight tonight if called upon, using a full range of military options in defense of the U.S. homeland and Allies. Adm. Harris encouraged greater trilateral cooperation between the U.S., Japan, and the ROK - a partnership with a purpose to meet the North Korean threat.”

North Korea said on Friday that its ballistic missile test on Tuesday that breached Japan’s air space was to punish Japan for its annexation of the country in 1910.

“Hwasong-12 [intermediate-range ballistic missile] flew over the sky of Pyongyang and across the islands of Japan,” Rodong Sinmun, North Korea’s state newspaper, said on Friday. “Now our people are satisfied after all those years of injustice since the annexation treaty was signed 107 years ago.”

The missile fired Tuesday reached an altitude of 550 kilometers (341 miles) and flew 2,700 kilometers for 29 minutes before falling into waters to the east of Japan’s northern island of Hokkaido, according to the South Korean military.

In response to the missile launch, the United States sent strategic assets to South Korea on Thursday: two B-1B Lancer bombers from Guam and four F-35B stealth fighter jets from U.S. bases in Japan. They performed exercises with four South Korean F-15Ks, a South Korean military official said. The drill was designed for a pre-emptive strike. U.S. President Donald Trump seemed to close the door on any dialogue with the North in his latest tweet about the country.

“The U.S. has been talking to North Korea, and paying them extortion money, for 25 years,” he tweeted Wednesday. “Talking is not the answer!”